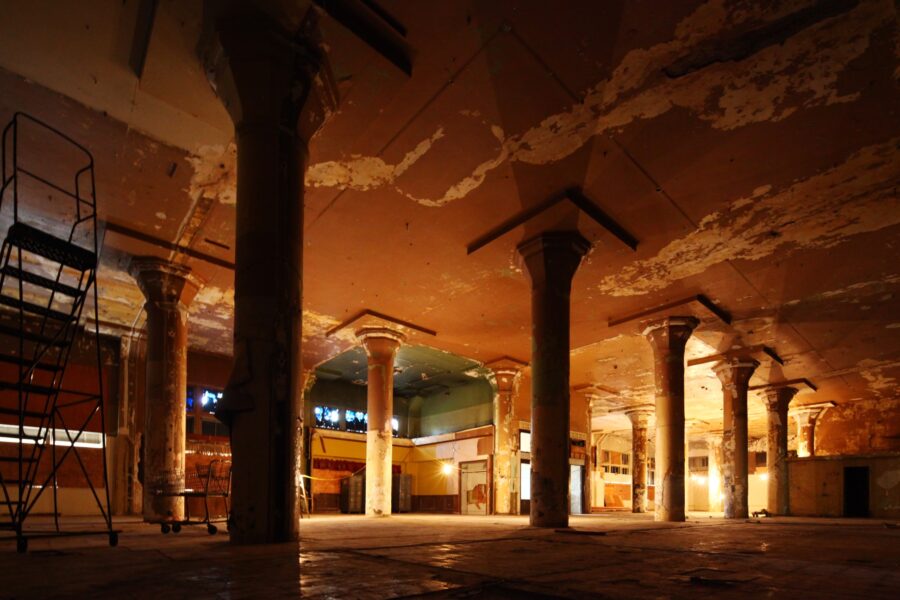 A few weeks ago we looked at the history of an ornate shuttered factory in Washington Park, the Schulze Baking Company building (interior above). While the structure has been vacant for several years, it will soon live again serving an industry that initially seems unlikely for the South Side: information technology.

But before examining what’s taking place there and elsewhere on the South Side, let’s look at the data center landscape and why much of the future growth will take place in Chicago.

The economy of the past few years has caused many companies to delay investing in technology. They are now more optimistic, and as a result of delayed investment, much of their current hardware is obsolete. In addition to a new sense of optimism, there has also been a surge in recent years toward outsourced data storage and information technology management. Data center growth will be quite substantial in the near future.

A recent survey [PDF] of data center professionals by the Uptime Institute indicated that almost 1/3 of them plan to build a new data center in the next 12-18 months. 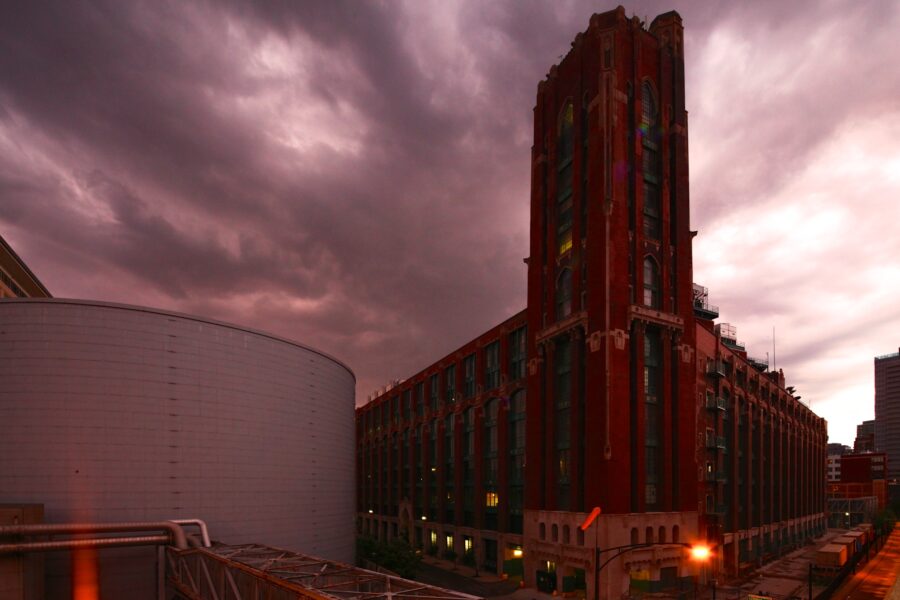 Lakeside Technology Center, one of the largest data centers in the world

Often overlooked in recent data center growth is Chicago, which has many significant advantages. It isn’t a secret to all though–it currently hosts 29 data centers, including one of the world’s largest (pictured above) at 350 West Cermak in South Loop. The Lakeside Technology Center has 1.1 million square feet of space.

In a previous life, this beautiful Gothic building housed the printing presses that made the Sears catalog.

The Goldilocks City for Data Centers

When it comes to what’s important for a data center location, Chicago is just right. A few of the contributing factors that led to the city’s explosive growth a century ago are also contributing to the current local growth of the industry:

And while Chicago may not be the first city you think of for tech companies and internet startups, they’re thriving at places such as 1871 and Catapult. You can find a map of them at Built in Chicago.

The Arrival of Gigabit Internet to the South Side

Last Fall, Gigabit Squared announced that the South Side of Chicago would be the first place to receive a gigabit broadband fiber network as a part of their college town connectivity program:

Gigabit Squared has set aside $5 million for the Chicago project as part of its Gigabit Neighborhood Gateway Program in collaboration with partner Gig.U. The State of Illinois is kicking in $2 million, while the University of Chicago is committing $1 million now and plans to raise another $1 million in the surrounding communities.

This is significant because while Google Fiber was intended to shame ISPs into providing higher bandwidth gigabit connections, it has yet to materialize. Internet connectivity at gigabit speeds is currently available in only a few cities.

In an effort to encourage more business in this area, the mayor recently announced the launch of Data Center Express, a joint partnership which provides a single point of contact and streamlines the startup process for standing up a data center. 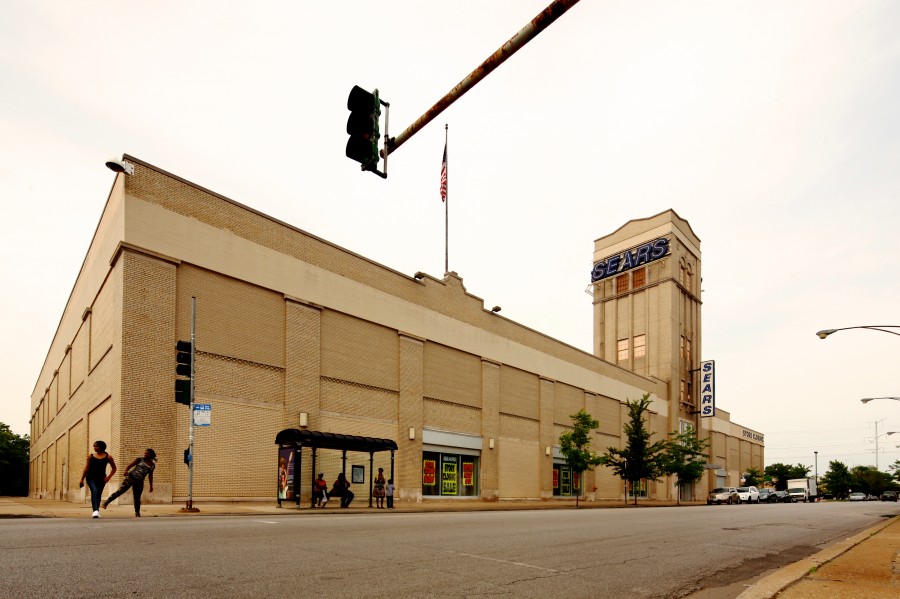 The first Sears location to transform from retail to data center, located on 79th Street

Sears: Adjusting to a Changing Landscape

Sears, the hometown company which once had a near monopoly on the sales of durable goods shipped across the country, has been facing declining sales in recent years. As a result, they’ve been scaling back their physical presence and leaving empty stores behind. 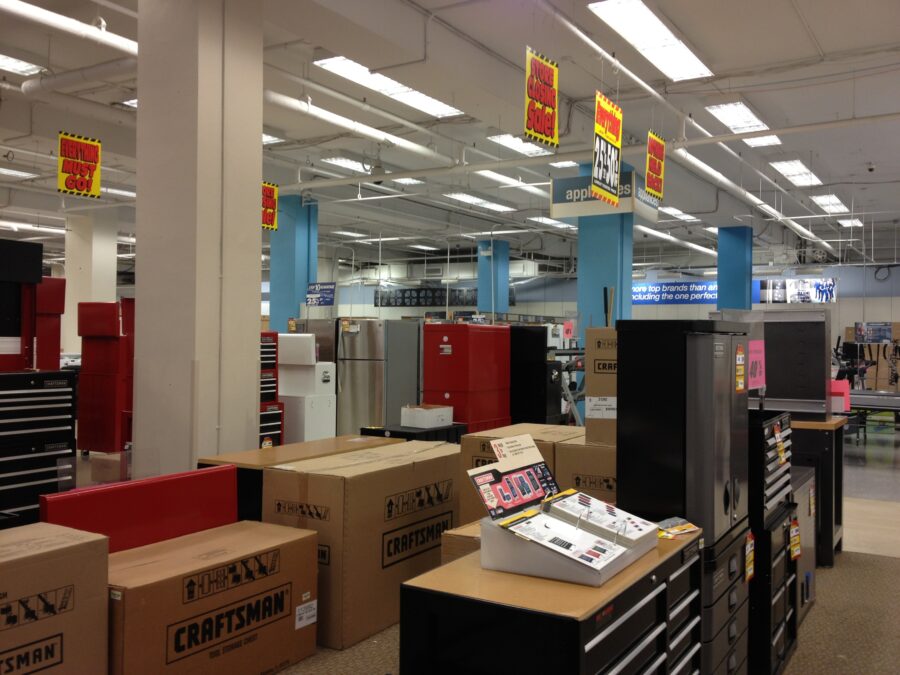 After recently announcing the closure of two stores on the South Side, many were left wondering what would happen with the buildings. The answer was surprising: one of them would be transformed in to a data center.

Now they’re looking for customers to transform and occupy the space. 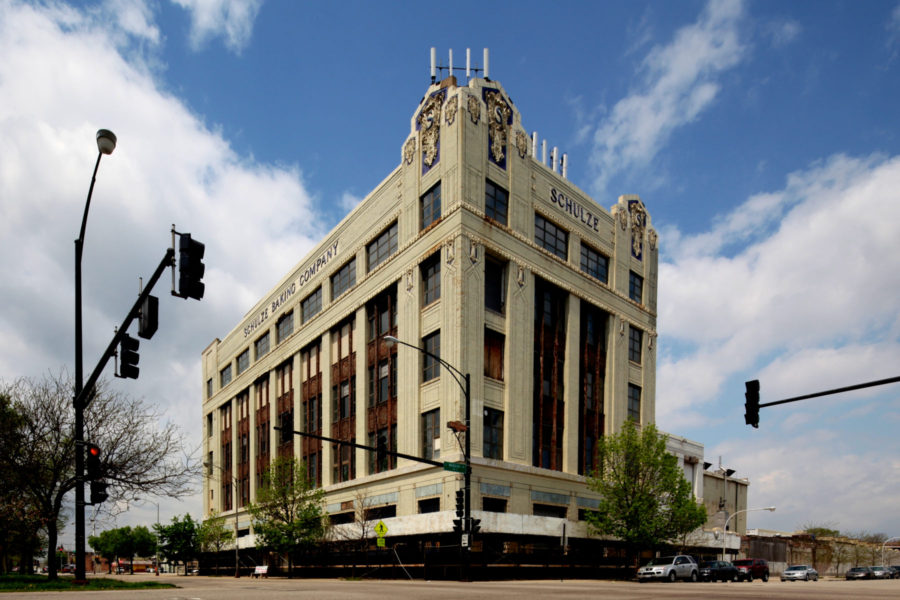 When I first visited the Schulze Baking Company Building a few weeks ago, I had no idea of its proposed future. It wasn’t until after publishing the first article that I spoke to the building’s new owner, and learned of his grand plan: about 50 employees, 120,000 square feet of data center space, and the rest for office space and other use.

Investing in the South Side

Leading the project is real estate developer Ghian Foreman. He has roots in the area, saying: “I grew up on 50th and Drexel, and my business partner grew up in Englewood. This project is like meeting in the middle for us.” He beams with pride when speaking about the history and culture of the South Side, and is eager bring technology and investment to the area. 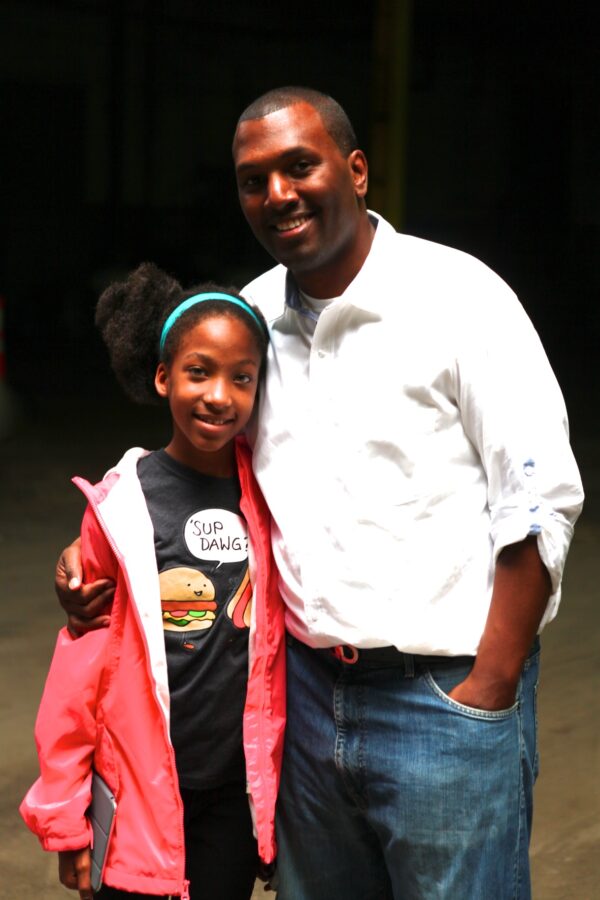 Ghian Foreman and his daughter Jade

His company bought the building in 2006 and had initially planned to convert the space into residential apartments and retail space. Everything changed a year later with the collapse of the economy and real estate market, and the millions of dollars promised in TIF and tax credits were slow to materialize.

He decided to pivot, and became a information sponge in an area he admits to knowing little about until very recently: information technology. 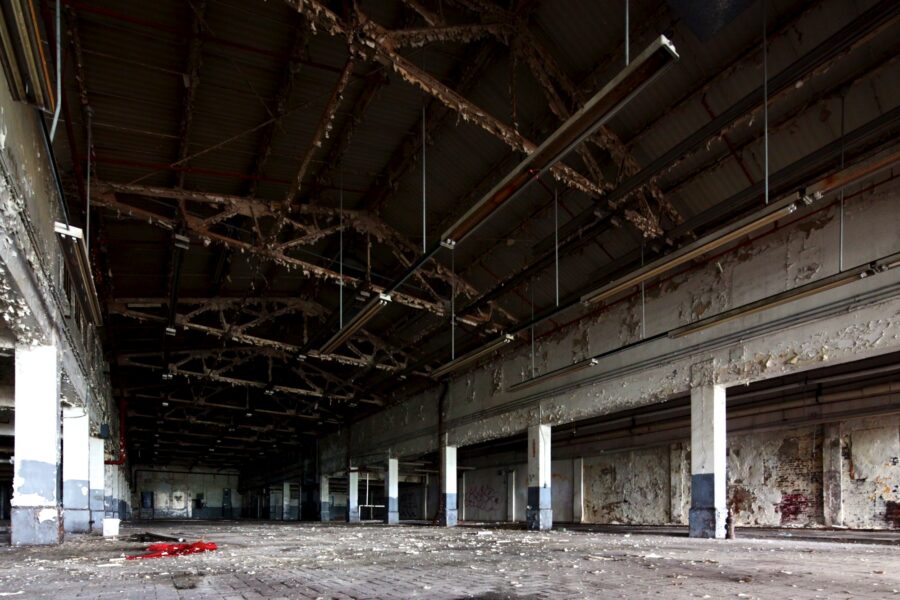 Designed to dissipate heat produced during the bread baking process, this shuttered food production site is a natural fit for a data center

Designed For Baking, Good for Data

Mr. Foreman provided a lot of detail and history on why the building is well suited for use as a data center. High ceilings, strong structural supports, and a layout designed to dissipate heat. Many newer data centers utilize a “chicken coop” design that is similar to the room in the photo above: long rectangular rooms with a long side with openings facing prevailing wind, allowing natural cooling.

The shape of the roof naturally allows the heat to be piped out. A longer term plan for this project is to shift heat output to surrounding businesses and schools, rather than into the atmosphere. 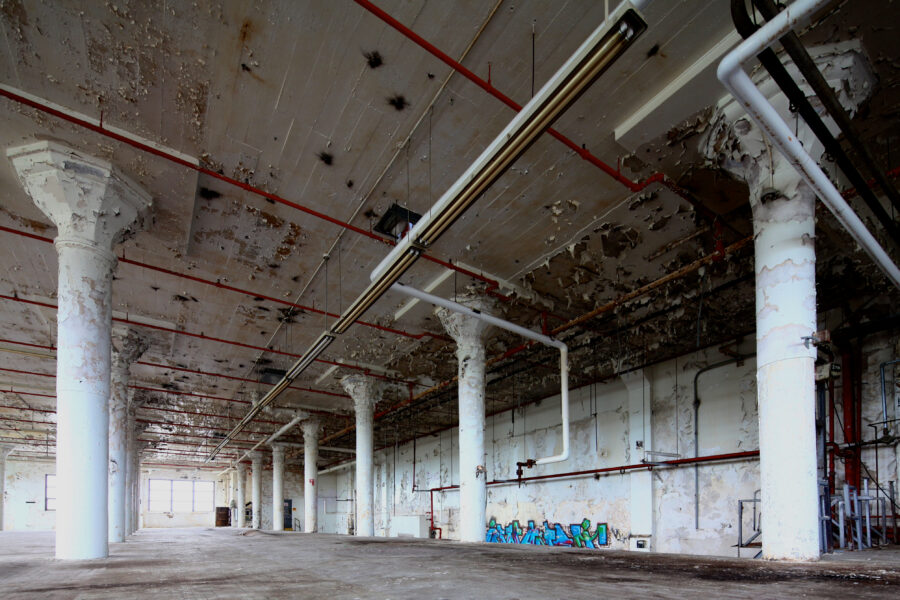 Initial design work for bringing this beautiful icon of the neighborhood back to its former glory has been done by Pappageorge / Haymes and Gensler. Mr. Foreman and his business partners are currently speaking with three companies, and expect to see operations begin this year.

Located right next to the Dan Ryan Expressway and a few blocks away from Red and Green Line stops, the area is easily accessible. It’s also about a mile away from the University of Chicago. 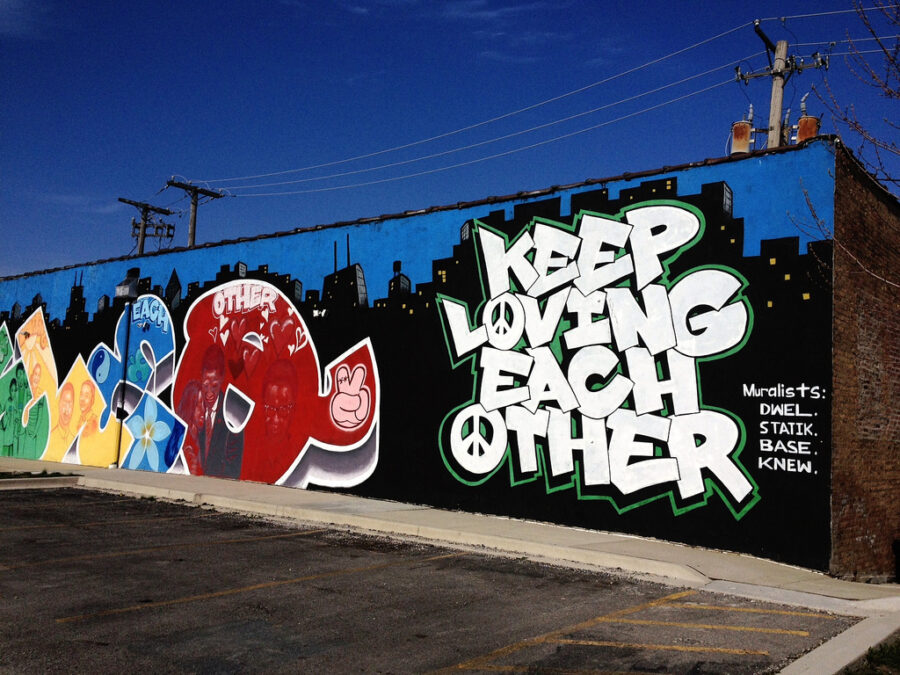 A Grand Opportunity, but a Grand Challenge to Common Perceptions

While Mr. Foreman’s optimism and excitement about near-term South Side development is as contagious and genuine as I’ve ever seen, he’s also realistic about the challenges in having technology companies locate their offices in the South Side:

I’ve traveled all over, and Chicago is probably the most segregated city I’ve been in. What happens is, some people come here and say: “this is a bad neighborhood.” But it’s not a bad neighborhood, it’s a black neighborhood. That’s something we have to overcome. Then they say “it’s so far.” But we’re only 5 miles from downtown. If you put a hundred million dollar project in this neighborhood, it would do so much. Construction workers will eat in restaurants, shop in stores, and the whole area will benefit. 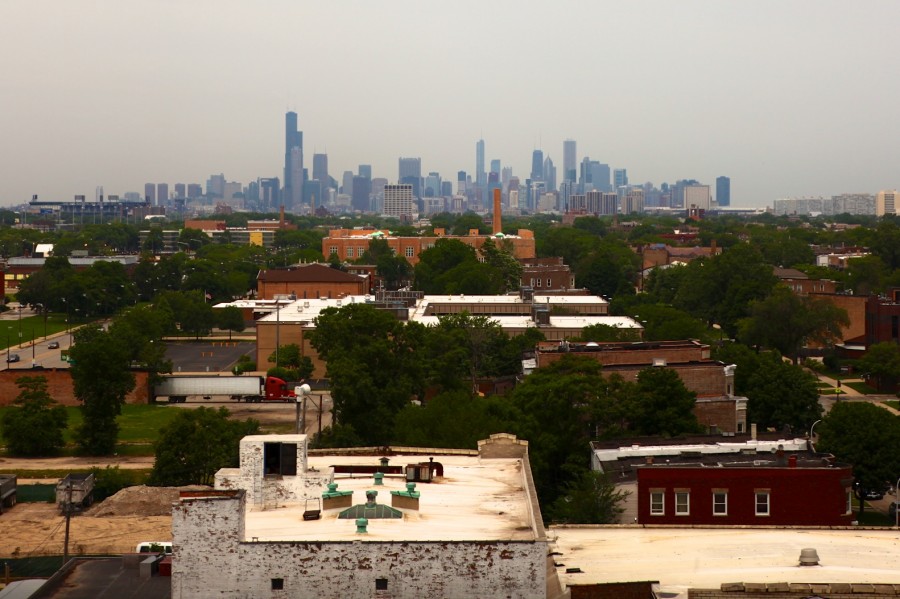 The skyline from the roof of the Schulze Baking Company building

An Office with a View

In addition to the data center use, plans also call for office space on the top floor. With wide open spaces, an industrial feel, and high ceilings, the space is well suited for it. It also provides a beautiful view of the skyline. 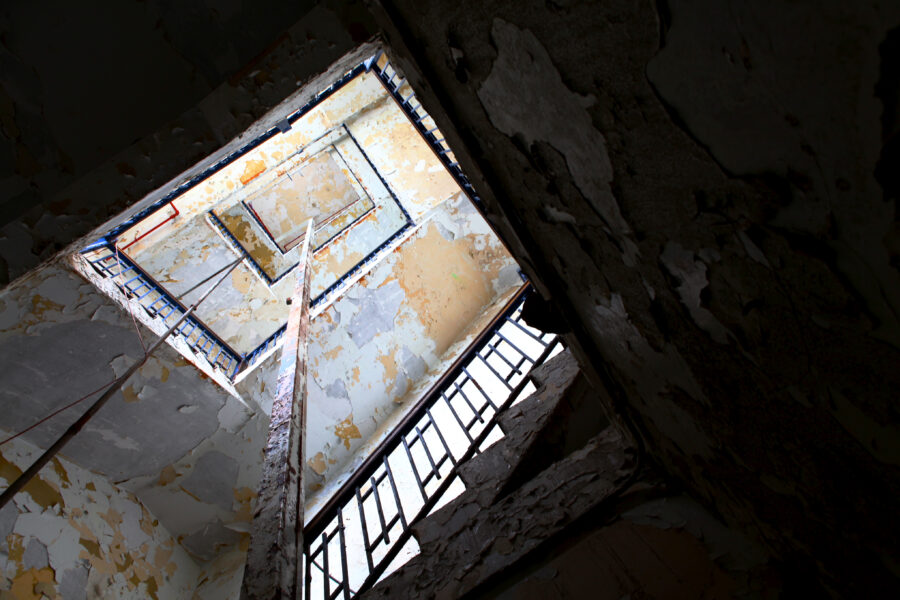 A Long Way to Go, But Things are Looking Up

When the previous occupant of this building shuttered the factory in 2004 and laid off 129 employees, there was little hope that jobs and investment would return and stabilize the community. For the first time in a long while, Washington Park has reason to be optimistic about the growth of industry.

The growth of data centers and information technology is only a tiny step in climbing out of decades of deindustrialization and disinvestment, but it’s a step in a promising direction.

One response to “The South Side’s New Industry: Data Centers”