1879 afternoon edition of the Daily News

The Daily News was founded in 1875 and began its life as a penny afternoon edition paper. In the late 1880s, the cost of the morning edition was lowered to the same price, and daily circulation reached 200,000. This resulted in becoming one of the most widely read newspapers in the world. 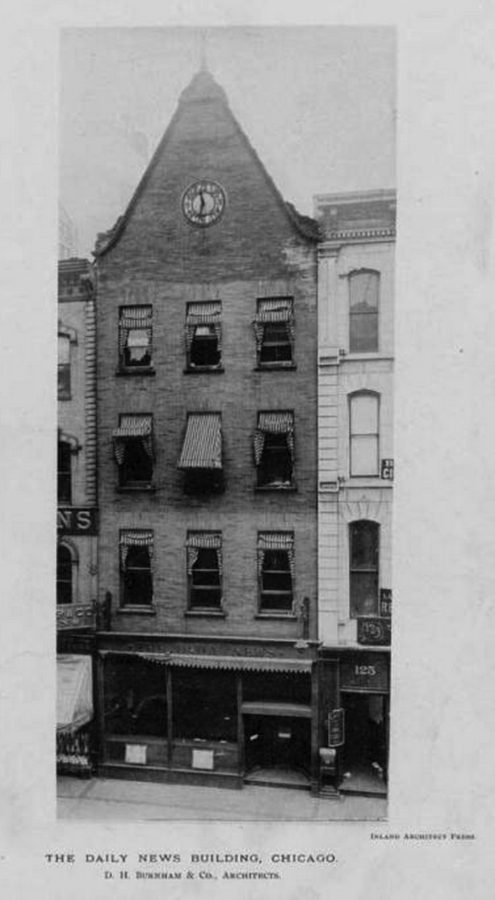 By the 1920s, circulation nearly doubled to 430,000, and the company began to explore options for a new building. 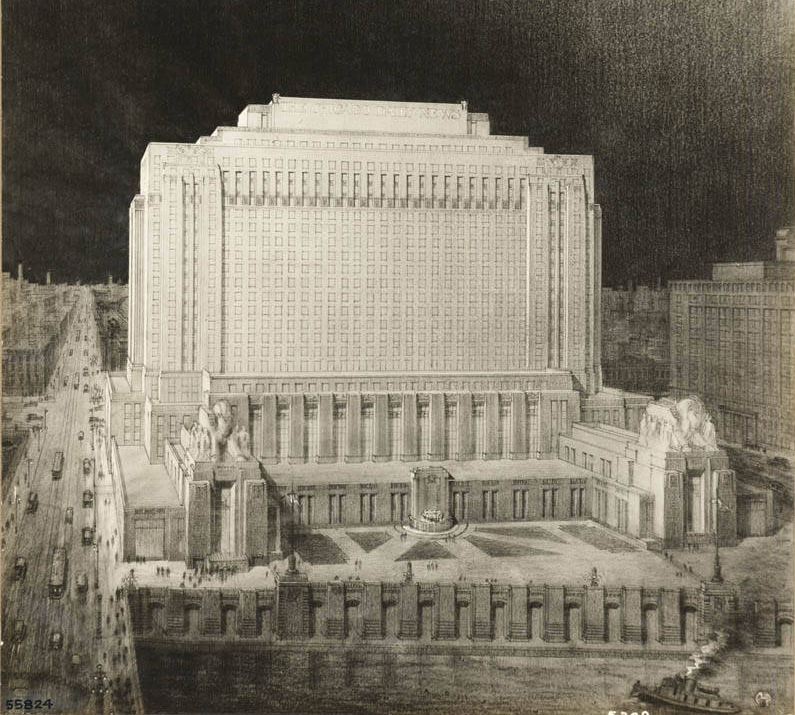 Drawing of Daily News Building, courtesy of The Art Institute of Chicago

The New Era of Art Deco

The building was designed by Chicago-based architecture firm Holabird & Root. Formerly known as Holabird & Roche, the firm rebranded after the deaths of its principle architects. The son of the firm’s founder and another local architect took over operations in 1927.

This transition marked a move away from the Chicago School of architecture which, propelled the firm to prominence, and into the new era of “functional architecture,” later known as Art Deco.

While the Tribune Tower was a grand celebration of tradition, the Daily News Building was a bold look toward the future. One common contemporary descriptor of Art Deco was “functional” — a way of conveying that the building’s appearance is defined by its purpose.

Access to the river and railroad was an advantage for distribution, but also for circulation and sales. This was touted by the publisher in an advertisement in another paper:

Its site is focal. Two-thirds of Chicago business people enter the Loop from the North, the Northwest, the West and Southwest Sides. Sixty-five thousand suburbanites pass through the Chicago Daily News concourse twice daily. Its space is eagerly demanded. Like the great journal is houses, it is a monument to service rendered and a pledge of greater service to come.

Opening Celebrations with the President

The opening celebrations of the Daily News Building featured several prominent figures of American history, including the United States President:

President Hoover will press the button at 4:30 that marks the final taking over of this huge building and a program of entertainment and greeting will surround the President’s contribution to the ceremonies.

Exuberance during the most prosperous and prolific decade in Chicago history would come to a halt just a few months later, with the Stock Market Crash of 1929. 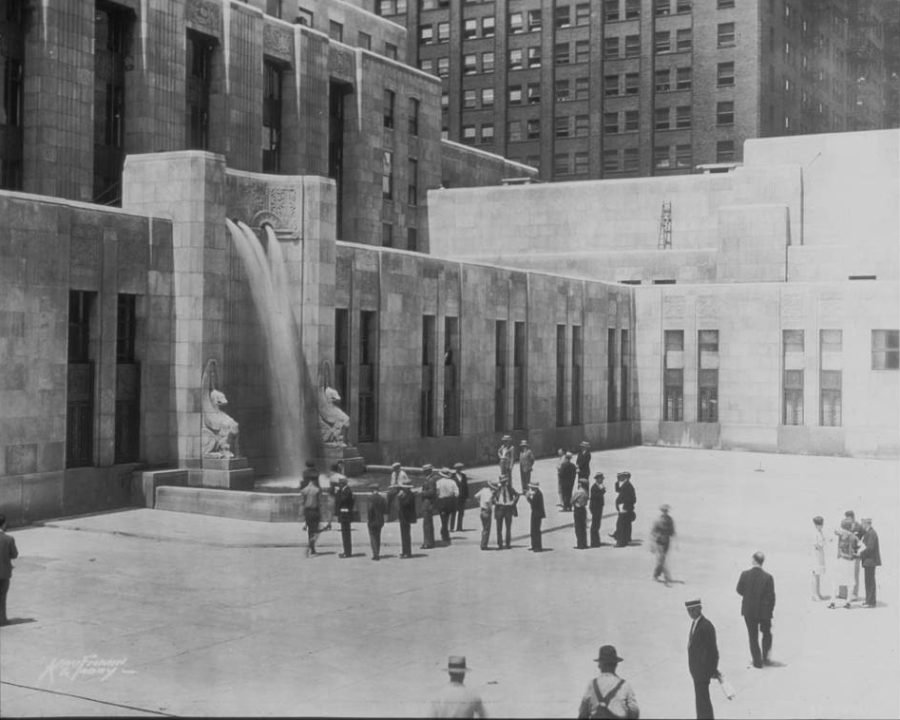 Daily News Plaza, courtesy of The Art Institute of Chicago

Embracing The River with a Grand Plaza

While Mies’ 1958 Seagram Building in New York is often credited with starting the trend of open air plazas, the Daily News building had it nearly 30 years earlier.

According to American Art Deco: Architecture and Regionalism, it was the first American skyscraper with an open air plaza as part of the design and, even more unusual in its orientation–facing the river.

All other buildings faced the opposite direction. The river was heavily polluted and not commonly viewed as an asset or object of beauty as it is today. 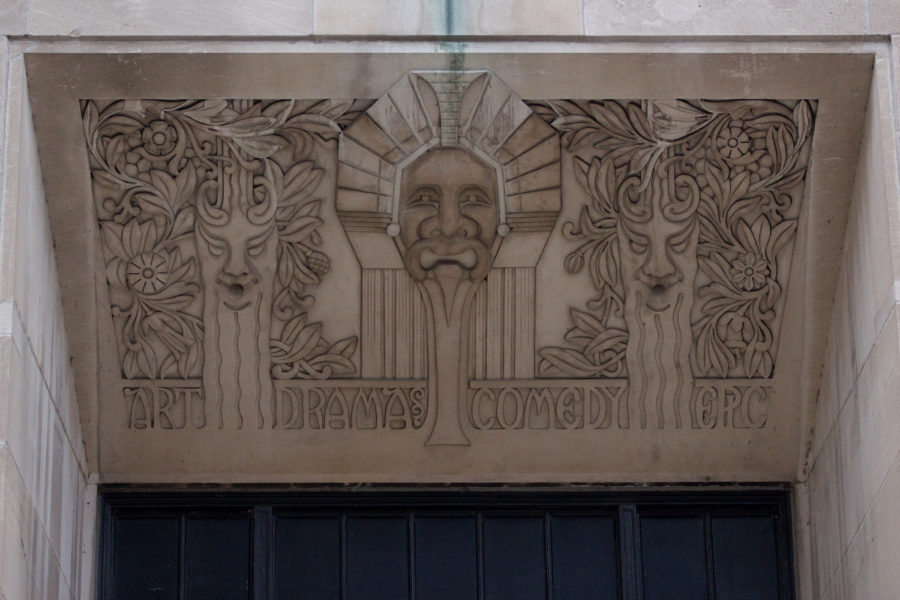 Lintels Heavier than a Truck

The building is adorned with multiple bas-relief panels depicting the history and culture of the written word. The largest ones are above the north and south entrances, weighing 12 tons each. 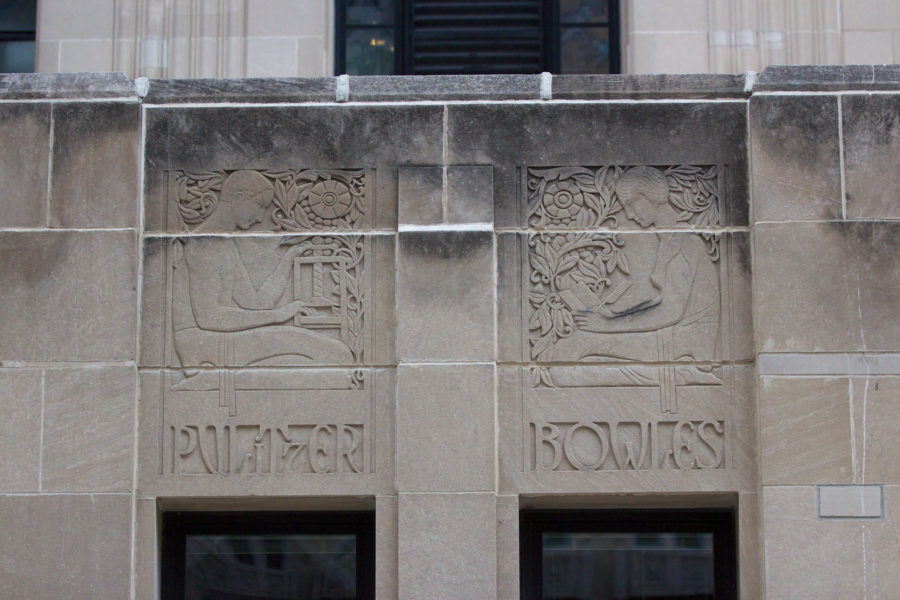 There are eight important figures in newspaper and journalism history depicted on the fourth floor of the edifice, including:

Notable figures in journalism are lionized in limestone as are events. The example above marks the first printing press. 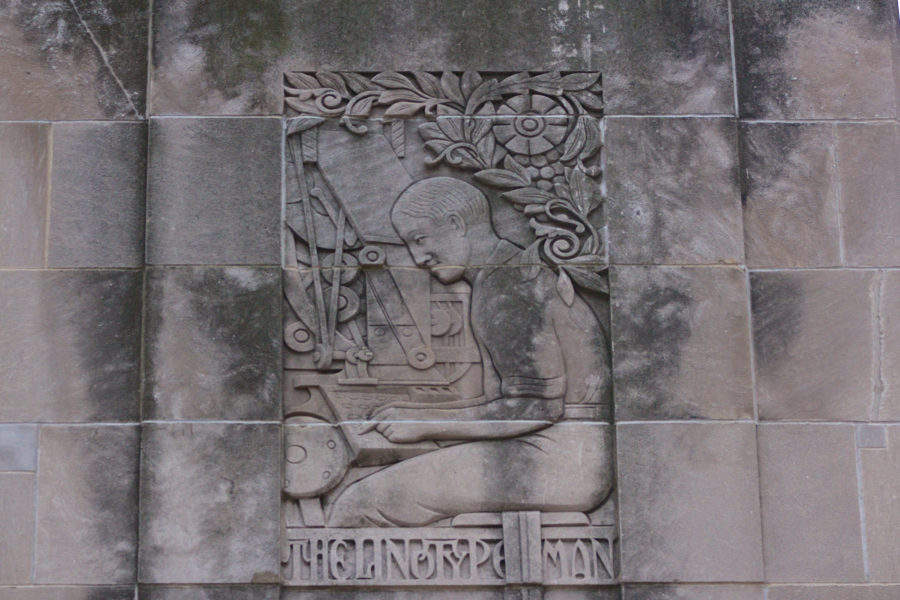 The celebration of the written word also recognized the common man, seen in the linotype man above.

The word linotype arose from its purpose: a device that could produce an entire line of type at once (a line of type – line o’ type). 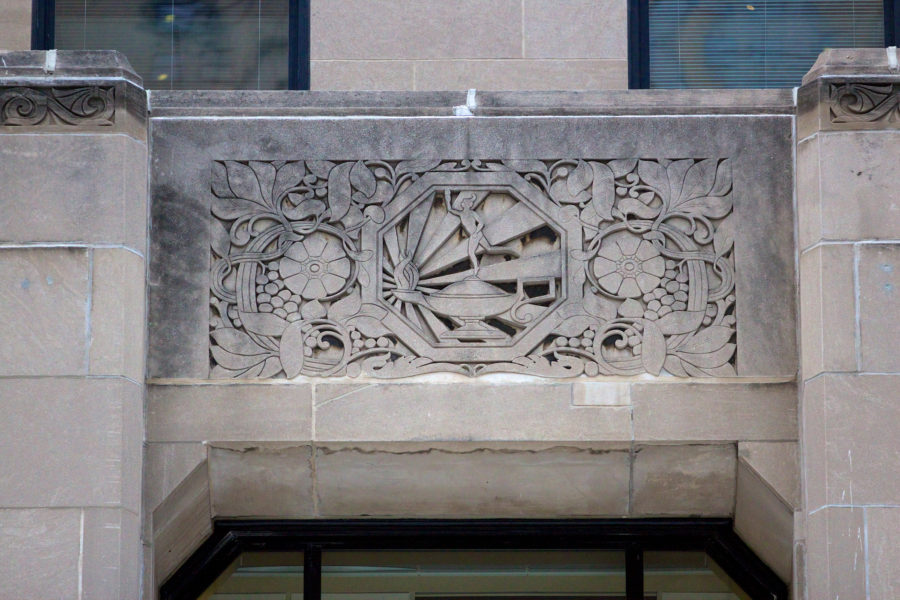 Other ornament on the grand building is in the form of printers marks.

A Printer’s Mark is a device dating to at least the 1600s. It is like a trademark or logo, serving as proof that the book was created by a particular craftsman. 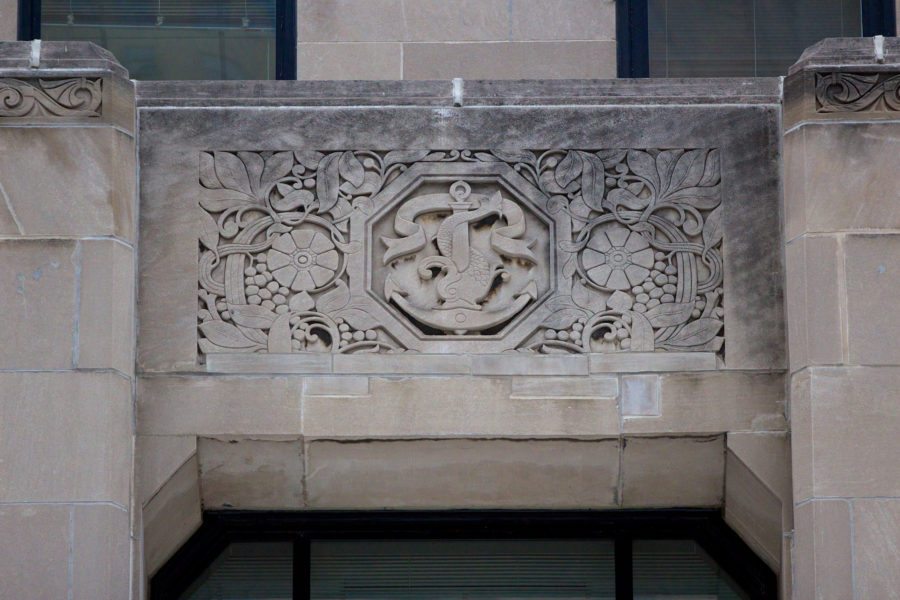 Similar to additions on photographs or more modern copy protection on software, the purpose was to prevent unauthorized duplication of created works.

Over time they came to symbolize the printing house associated with the work. The Daily News Building celebrates the private enterprises that brought knowledge, entertainment, and literature to the masses. 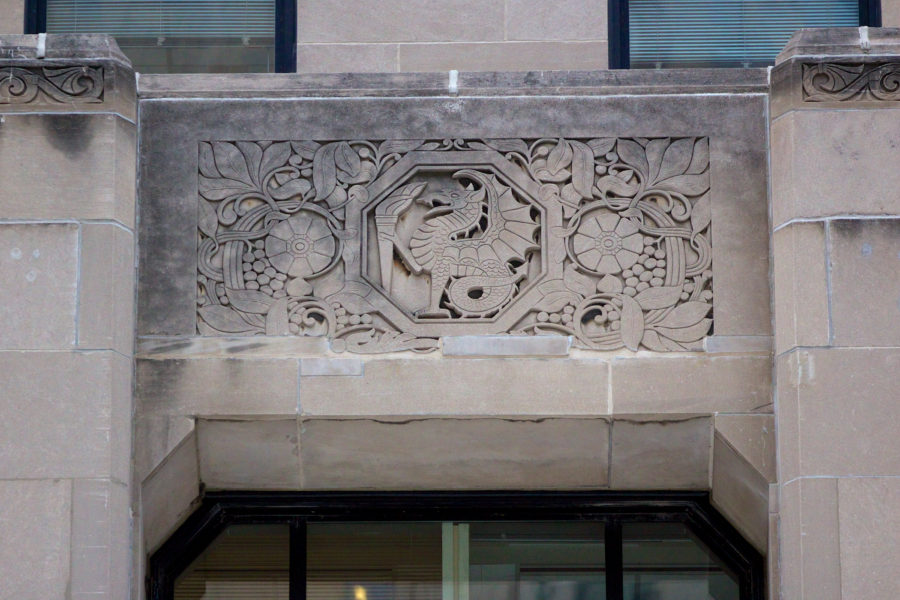 These printer’s marks are visible from the plaza.

Alvin Meyer sculpted these works as well as many others adorning buildings by Holabird & Root.

The bas-relief panels adorn this grand limestone structure like jewels on a treasure chest. Its treasure (currently removed) is an Art Deco mural by John W. Norton.

The mural depicts elements of journalism served up in a grand way to all entering the building. Like the exterior, it is in a modernistic style, featuring sharp lines and striking geometric shapes.

Journalist Marguerite Williams described the mural in this way:

A new kind of mural painting, born of the symbols of modern life and the magnitude of modern building….There, on the ceiling of a thoroughfare 180 feet long, will be read the romance of the modern newspaper ingeniously told by multifarious shapes and symbols–animate and mechanistic.

[…] a rhythmic teamwork of man and machine that makes the modern newspaper possible” and the “paraphernalia of news-gathering that has shrunk the globe into one neighborhood.

Removal of its Main Treasure

But sadly, this treasure is not viewable to the public. In 1993, the building’s owner, financier Sam Zell, removed the mural and announced plans to restore it. Restoration never happened, and it was speculated that the cost to restore it was more than he wanted to pay.

The best coverage of this sad chain of events over the years came from Blair Kamin of the Tribune. I recommend reading his 2004 article, News mural held hostage by dueling interests.

It is currently sitting in a warehouse, with little hope for a return to public view. 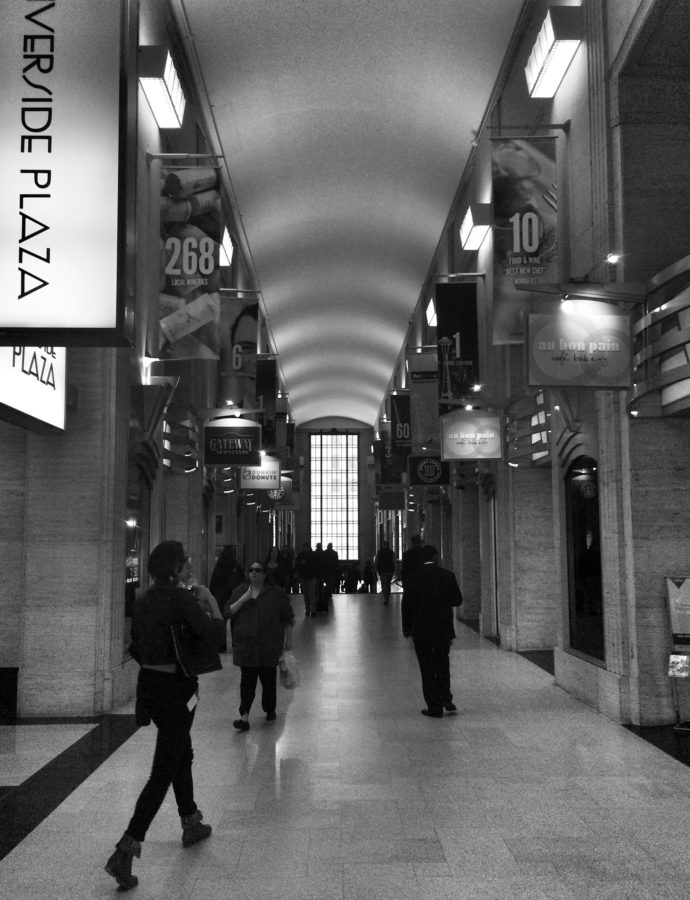 The Concourse Today, Minus the Mural

The main floor is full of activity during rush hour and lunch time as well as the plaza during the warmer days.  A recent renovation added design elements that resemble Art Deco, but it doesn’t compare to its original design. 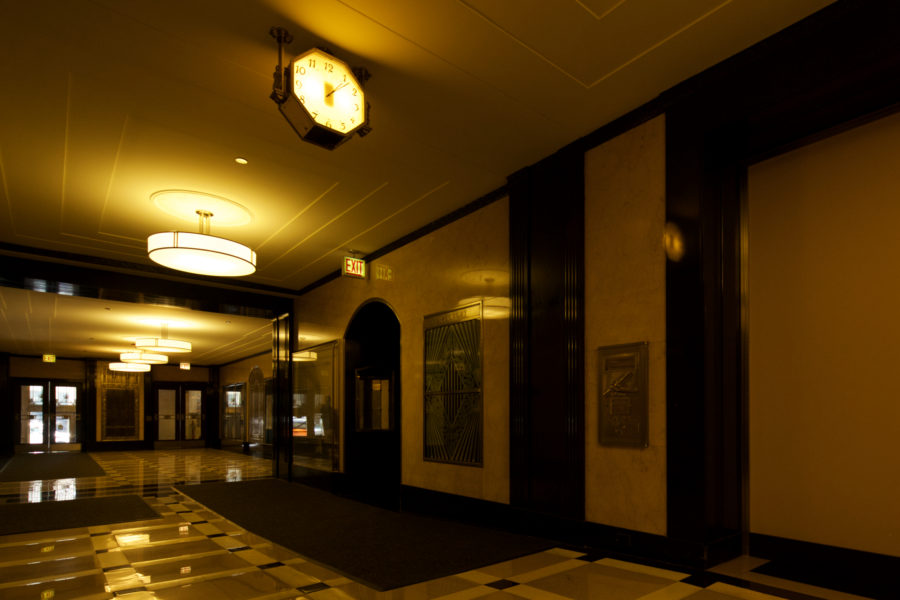 Though the main concourse features reproductions of Art Deco ornament, other sections of the building (Madison Street entrance above) are full of refined character. 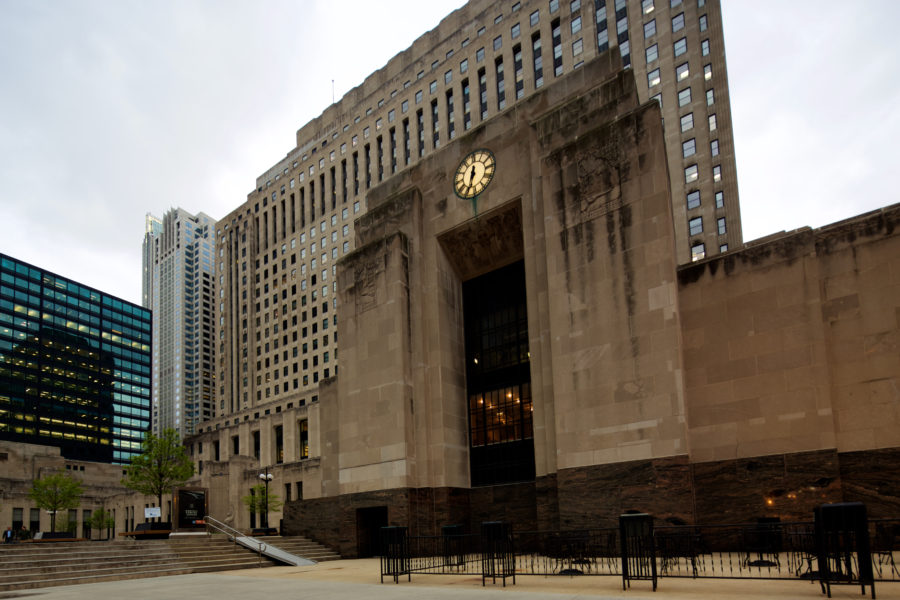 Saved From Demolition by Mayor Daley

As important as this building is architecturally and culturally to Chicago, it once faced demolition or severe alteration on more than one occasion.

One case occurred in 2000, as the Tribune’s Blair Kamin notes:

But now the old Chicago Daily News Building, one of Chicago’s finest examples of Art Deco architecture and a path-breaking work of engineering and urban design, has a sword dangling over its head.

The sword has been put there by its owner, billionaire financier Sam Zell, who has his offices in the 26-story building and is said to be weighing various options for the structure, which sits just east of the former Chicago & North Western railway station.

The owner was weighing options, which included a conversion to condos, a new office building on the plaza, or a complete demolition and replacement with a new building. Fortunately, Mayor Daley stepped in and made it clear that the building and plaza should be preserved as originally planned.

There was another scare in 2008 as Zell again announced plans for the site–a new office building on the plaza space. The economy prevented that potentially destructive action, but the plaza’s future is far from guaranteed. 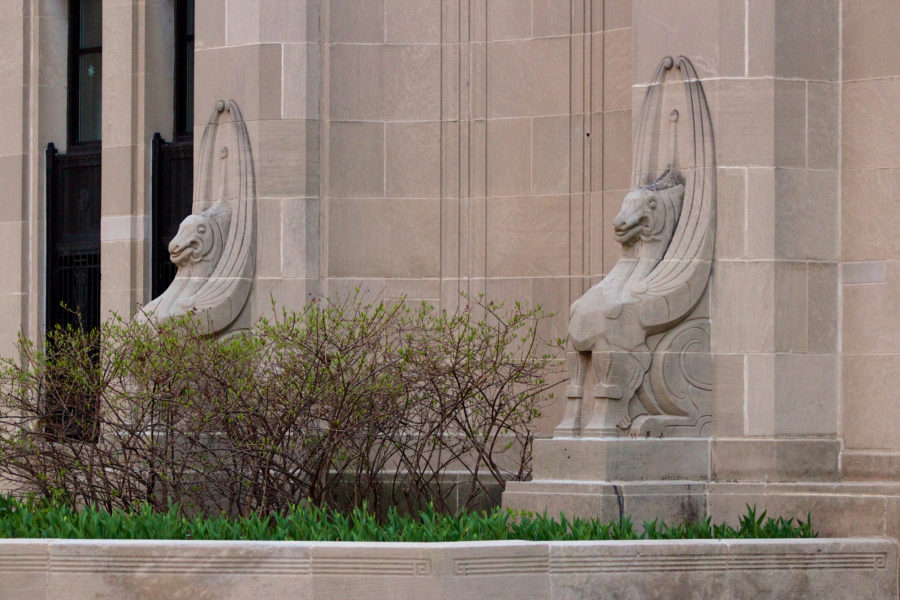 Though the fountain no longer functions and is frequently covered with advertisements, it remains intact today. 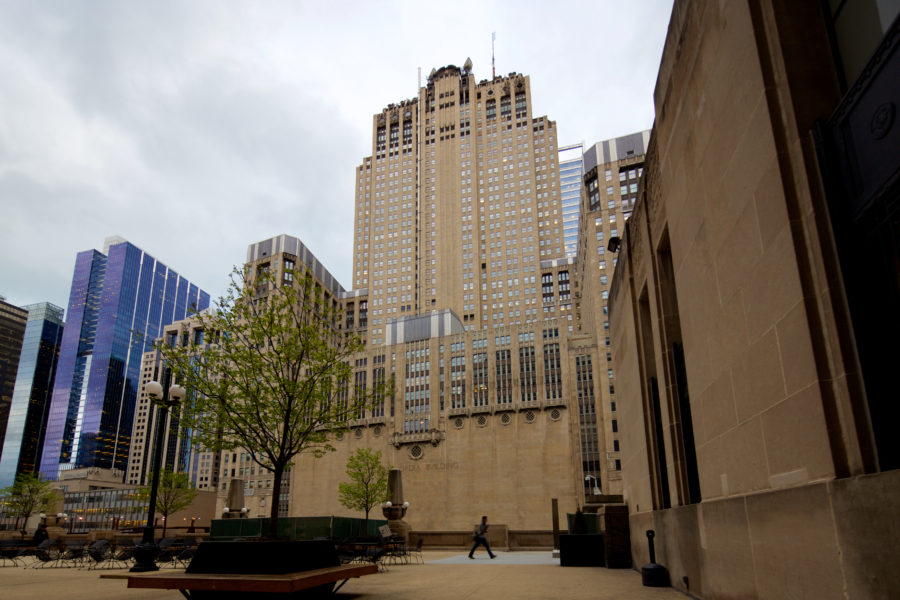 One of most striking features of the plaza is its view. The Civic Opera Building, designed in the same style, is directly across the river. 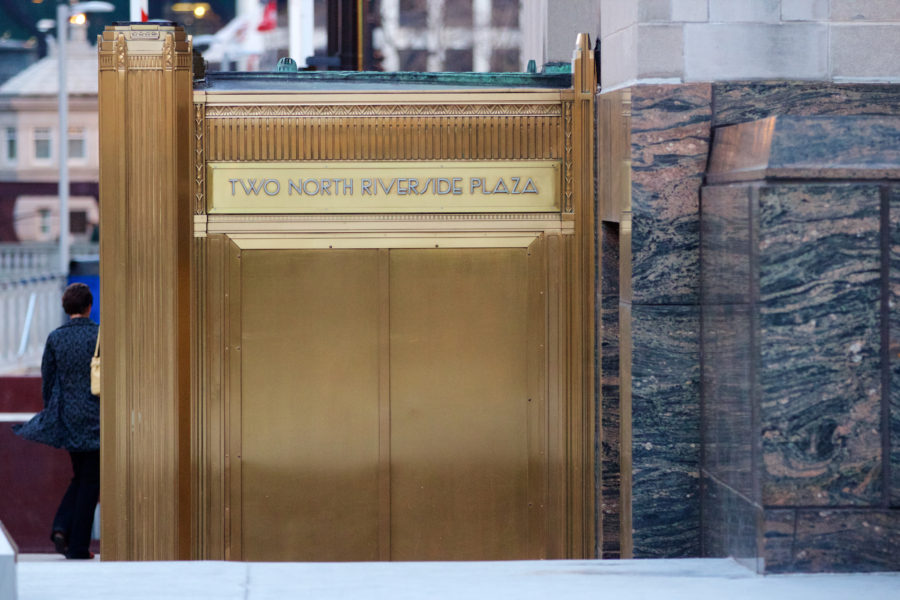 The concourse that connects to Ogilvie via a pedestrian bridge (above), originally the main lobby.

The Daily News Building is one of the most important pieces of architecture in Chicago. Though the interior mural is hidden away in storage, there are plenty of interior hidden works of art with dazzling geometry and color.