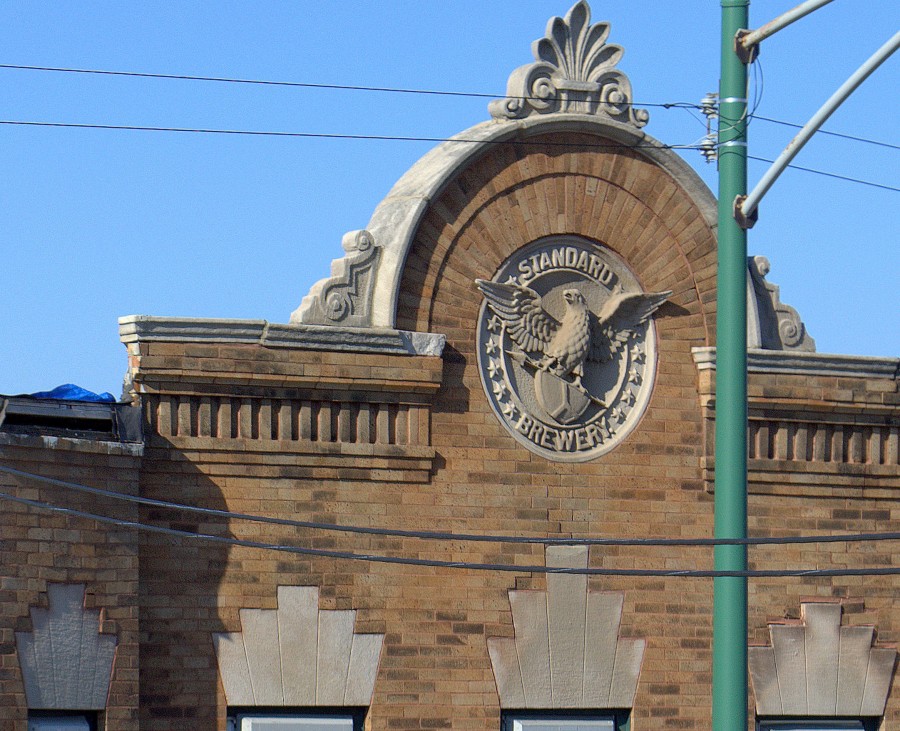 One month since my last update, I can now report that the demolition of the former Standard Brewery tied house at 3801 West Grand Avenue has been completed. It began early on Monday, July 13th, continued through that day and the next, and the building was completely wrecked & removed by sunset on Tuesday, July 14th. I visited the site several times over that 48 hour period of demolition, and some photos made during those visits are seen below. 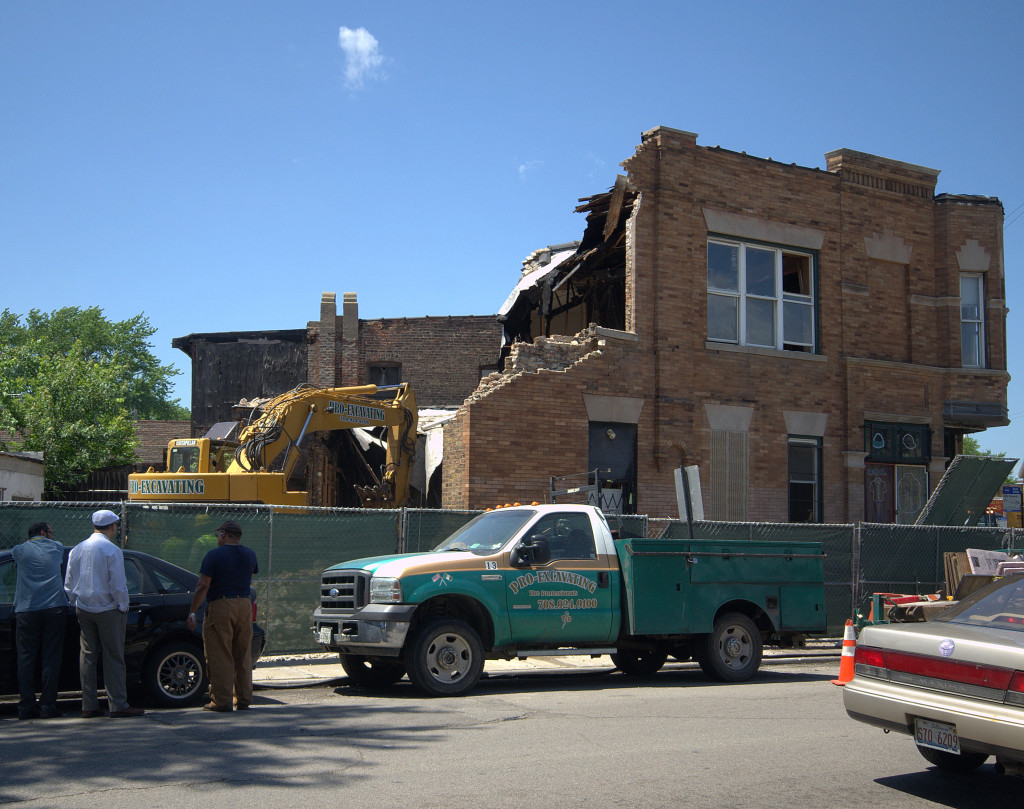 Eric Nordstrom, owner of Urban Remains warehouse and showroom, was also present to document and salvage various ornament and historic artifacts from the significant building—much of which would have probably been lost to a trash dump without his skilled intervention. According to his published article and our conversations with the building’s ownership, it appears the prominent limestone carved roundel depicting the Standard Brewery logo was successfully salvaged to be saved and preserved (although future plans for it have not been disclosed yet).

On June 8th, a demolition permit was issued for the former Standard Brewery tied house at 3801 West Grand Avenue (via Chicago Cityscape). After its initial addition to the City of Chicago’s Demolition Delay List for historically-significant structures last spring, it was removed for unknown reasons, but then re-added on March 10th, 2015. Since that latest 90-day hold and review period, it sadly does not appear any plan to save or restore the building and its historic architectural elements was formed.

One group, known as the “Chicago Brewing Museum”, had apparently hoped to purchase and re-purpose the building as a place to memorialize and display artifacts of Chicago’s rich brewing tradition, but it also appears those plans and the funding needed to do so did not materialize. When I first wrote this article over a year ago, I wished that perhaps enough interest in its historic value would be generated, and the people of Chicago might be able to somehow save this piece of history, but it appears that stronger forces of redevelopment may have succeeded instead.

As noted in the original article below, for more information on the City of Chicago’s Historic Preservation Division and its policies, or to voice your concern regarding this historic building, please contact the City of Chicago at 312-744-3200 and provide building permit reference #100580654. You might also try contacting the apparent owner stated in the permit, Mata Construction, at 708-425-3614. As of this writing, the building is still intact and no preparation work has started for its demolition. We will keep you notified of further developments in this regrettable turn of events.

Observing the north facade of the yellow-brick, two-story building at 3801 West Grand Avenue, there is a curious but exquisite masonry ornament in remarkable condition above a second story center window. It’s circular, finely detailed, and depicts a three-dimensional eagle in full-spread, toughly grasping an arrow & embellished shield, and surrounded by stars and the words STANDARD BREWERY.

Standard Brewery was a pre-Prohibition era brewery located in Chicago’s Tri-Taylor neighborhood at 2500 West Roosevelt Road (Roosevelt and Campbell) and was in business from 1892 until 1923. But while the West Side has been transformed by waves of population change during the 90 years since then, this corner building remains as visual evidence of a unique place and time in Chicago history. 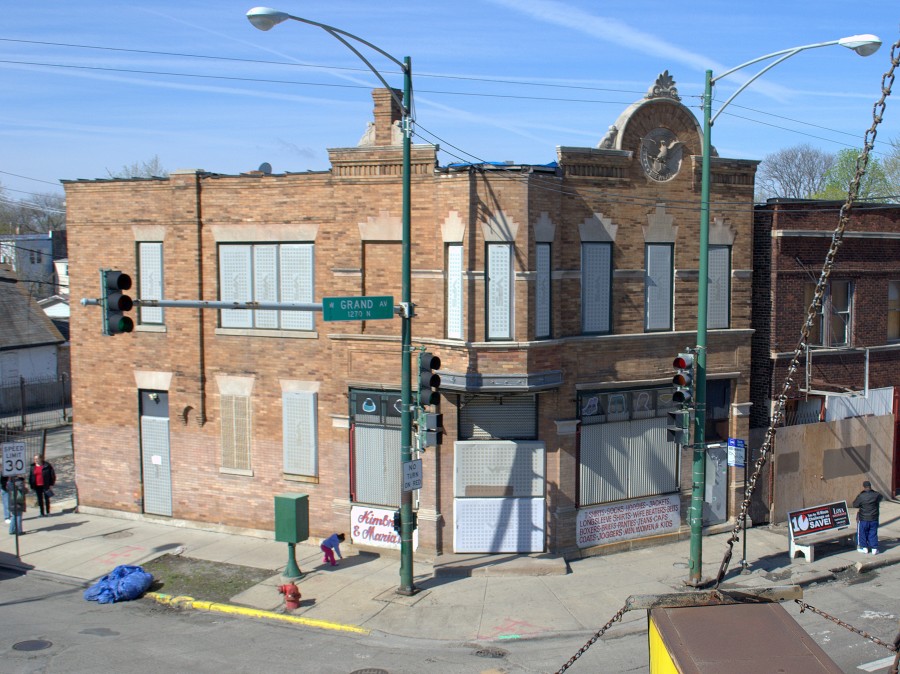 At the time, this decorative building on the southwest corner served as a “tied house”, a unique retail arrangement prolific in Chicago to exclusively serve and sell beer produced by one brewery. The obvious advantage of this arrangement to a brewery was a consistent demand of its product; a tied house would not change its supplier suddenly so, while consumer choice may have suffered, the brewer had a consistent market for its beer production. Visiting the intersection of Grand and Hamlin Avenues you feel a sense that this was once an important commercial corner for this neighborhood, situated between the more congested intersections at Division Street/Central Park Avenue to the south and Pulaski Road to the north.

Looking closer into the design of the Standard Brewery logo ornament, a particularly special detail is how the eagle’s shield integrates the use of the city’s legendary Municipal Device, illustrating strong civic connection and importance of this industry to Chicago’s pre-Prohibition development and growth. 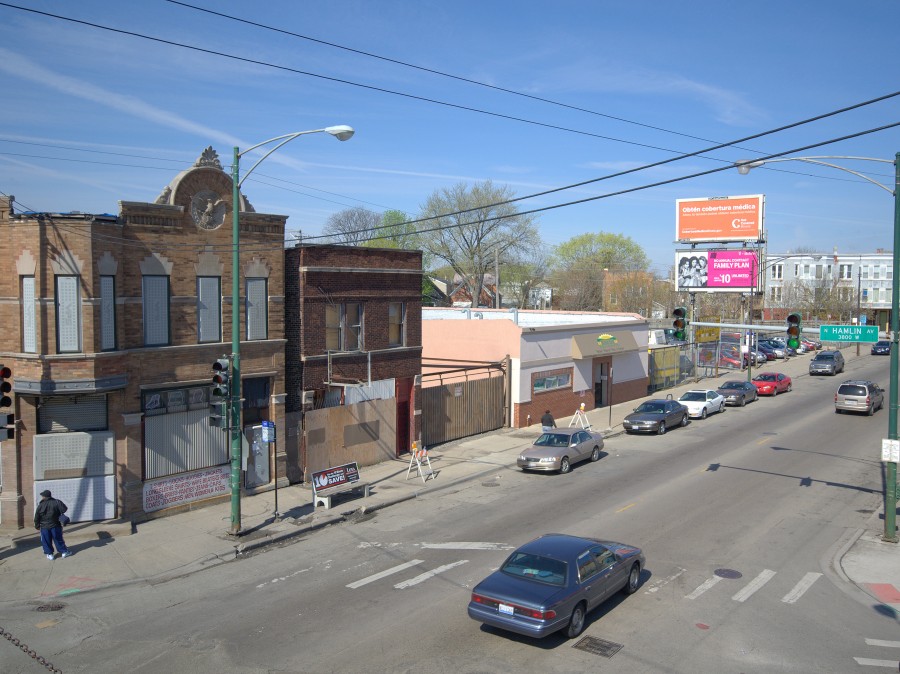 Viewing West Grand Avenue towards the northwest. In the distance is the light-blue three-story facade of 3839 West Grand Avenue, built 1894, which predates the construction of the former Standard Brewery tied house. Gabriel X. Michael/Chicago Patterns

Even more precious, this is the only known Standard Brewery “tied house” that existed in Chicago and yet it is still standing. However, 3801 West Grand Avenue is currently listed on the City of Chicago’s Department of Planning and Development’s Historic Preservation Division’s “2014 Demolition Delay Hold List“, which provides for a 90-day “hold” on issuing any requested demolition permit to allow the Preservation Division the time to explore building preservation options.

Once this hold period has elapsed (technically on May 14th, 2014), the building and its ornament may be erased from this West Humboldt Park streetscape, and we will lose the remaining physical record of Chicago’s Standard Brewery. 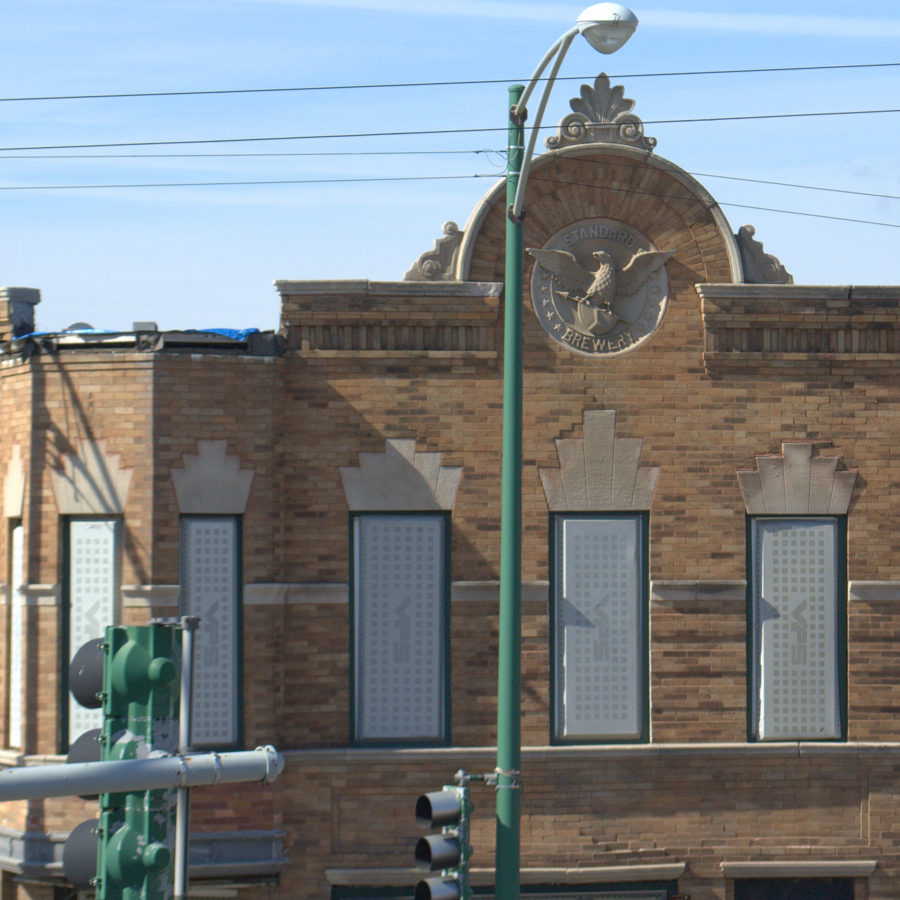 For a city promising its citizens to preserve its architectural heritage, it should require little effort to rally this support and “social investment” to make a difference here — especially from the recent wave of entrepreneurs in more gentrified communities miles to the northeast, devoted to the art of a local, craft, and authentic brewed product.

And if, in all practical terms, demolition is imminent and deemed “unavoidable” for this neglected building, the menial cost to salvage, preserve, and share this architectural artifact in some way should be explored immediately. We need the city of Chicago to do something instead of doing nothing before it is too late.

For more information on the City of Chicago’s Historic Preservation Division and its policies, or to voice your concern regarding this historic building, please contact the City of Chicago at 312-744-3200 and provide building reference #100526995.