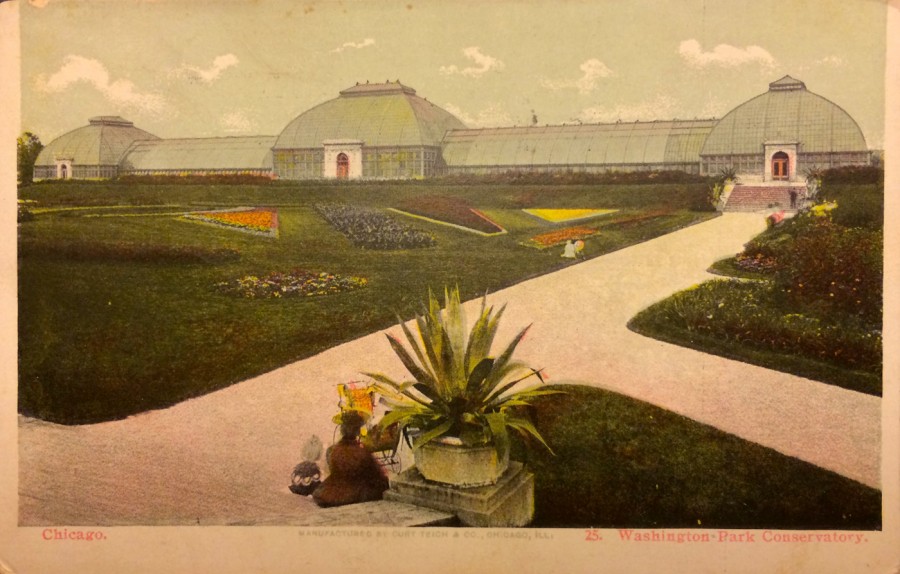 For Flashback Friday this week we take a look at a long lost South Side treasure–Washinton Park Conservatory. 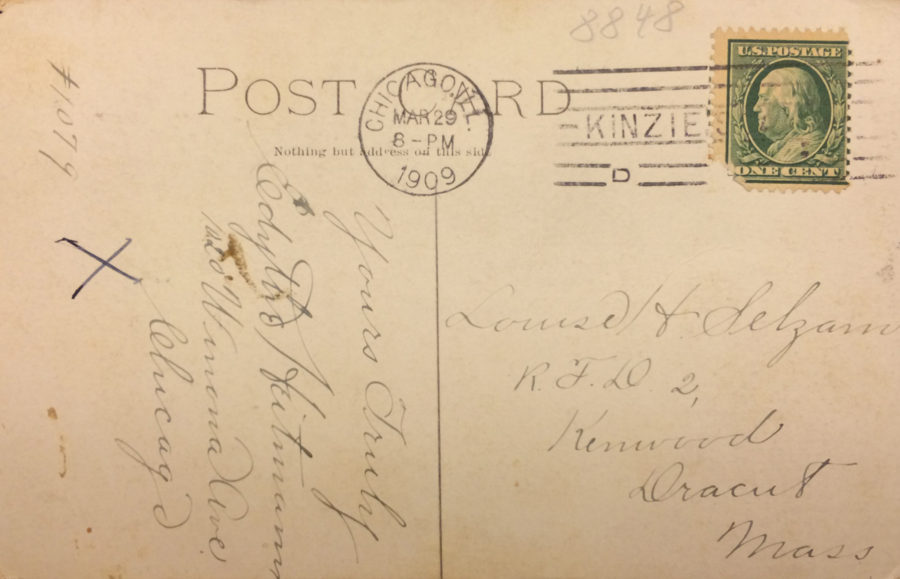 This postcard sent in 1909 has the address written as Winona Avenue, yet the designation for Winona is street. The 1909 Chicago address conversion guide [PDF] also uses street and not avenue for Winona. The sender’s address using the current system is 1342 Winona.

Although having a divided back and dating after the time when postcards were first allowed to contain written messages, in fine print straddling both sides are the words Nothing but address on this side. It’s a possibility that poor typesetting may have led Ms. Heitmann to believe that this type of card did not allow personalized messages.

Another anomaly is the white border on the postcard’s front. White border-era postcards are dated to after 1915, when World War I forced restrictions on ink usage.

D.H. Burnham & Co designed the structure, and the firm was considered the country’s foremost expert on building conservatories. It opened in 1897.

Washington Park Conservatory in 1907. Image courtesy of the Library of Congress

Tropical plants that had been exhibited at the World’s Fair were donated to the Washington Park Conservatory. To house this large collection, one of the propagating houses from the fair’s Horticultural Building was  dismantled and re-erected in Washington Park as an addition to conservatory in 1895. Two years later, the  commission razed the existing conservatory and greenhouse facility. They replaced it with a handsome new structure designed by Lord & Burnham Company, the nation’s premier conservatory builder. The long rectangular building had a fanciful central house with two smaller houses at the far ends. In this conservatory, South Park Commission horticulturalists planted in beds in the ground, an innovative approach during this early period in conservatory history.

Sadly, in the 1930s the depression took its toll and this conservatory and those in Humboldt Park and Douglas Park were demolished, as the National Register nomination continues:

By the mid 1930s, the Washington Park Conservatory’s attendance rates had  declined significantly, and the building suffered severe deterioration. The park district closed the building in August of 1936, and demolished it shortly thereafter.

Although the conservatory is no longer extant, Washington Park has many other treasures including the Fountain of Time and original Refectory designed by Burnham. You can learn more about the park from from the Hyde Park-Kenwood Community Conference.

One response to “Washington Park Conservatory”