Jackson Park and the South Shore Cultural Center get top billing for a third consecutive year. The historic parks continue to languish – and in some cases literally crumble – while fights over the future Obama Presidential Center, an expensive and controversial proposed golf course expansion, and $172 million in related road work rage on, likely fueled by the outcomes of Chicago’s historic election yesterday.

Worries about both historic preservation and displacement of established communities ripple outward from Jackson Park into nearby Woodlawn, where the long-languishing Loretto Academy building – owned and neglected by a major area landlord – has reached a critical state of bad repair. This historic and attractive building could provide much-needed affordable housing in the area, but it must be saved soon.

While many of the imposing mansions along King Drive in Bronzeville have been restored, one of the most striking has crumbled for many years. Built for an important jurist, and long home to a prominent activist couple, this elegant and unique home needs a quick intervention before damage becomes irreversible.

Art Deco and Gothic styles blend in this cathedral to electricity in Little Village, one of several now-closed coal power plants in the area. Unfortunately, the City has already issued a demolition permit for this muscular and eminently re-usable building, without the delay required due to its Orange rating in the Chicago Historic Resources Survey. The developer that owns the property wants to bulldoze it and build a warehouse and truck-loading facility, but the plans are hamstrung by community opposition to this new source of pollution – as well as by corruption scandals affecting the area’s alderman.

In Austin, the Laramie State Bank is a one-of-a-kind terra cotta jewel box, but has languished, empty and deteriorating for a number of years. This distinctive building could be an anchor for new economic development, but its condition is rapidly becoming critical.

The Rotunda Building at O’Hare International Airport makes the list for the first time. Though disfigured over the years, it remains a remarkable structure at an airport with a large inventory of interesting architecture. Models created by architecture firms bidding for the task of designing a new terminal all showed the building remaining in place, but such a major project presents an opportunity to restore it to its former glory.

In Lincoln Park, the oldest Christian Science church in active use, designed by noted architect Solon Beman, faces an uncertain future. The congregation plans to sell the building, which is not protected from demolition. The elegant domed structure could find reuse as a cultural space – or it could be demolished.

Finally, Preservation Chicago sounds the alarm about a tidal wave of church consolidations and closings which the Archdiocese of Chicago is beginning to implement. Many of the largest, oldest, and most architecturally-significant church buildings – with their high maintenance and operating costs – may find themselves in need of new uses, and soon, touching off preservation crises in many neighborhoods in short order. 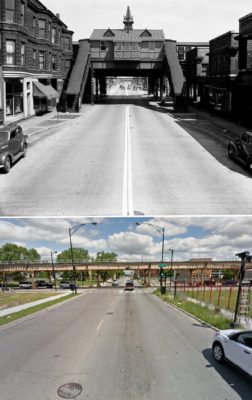