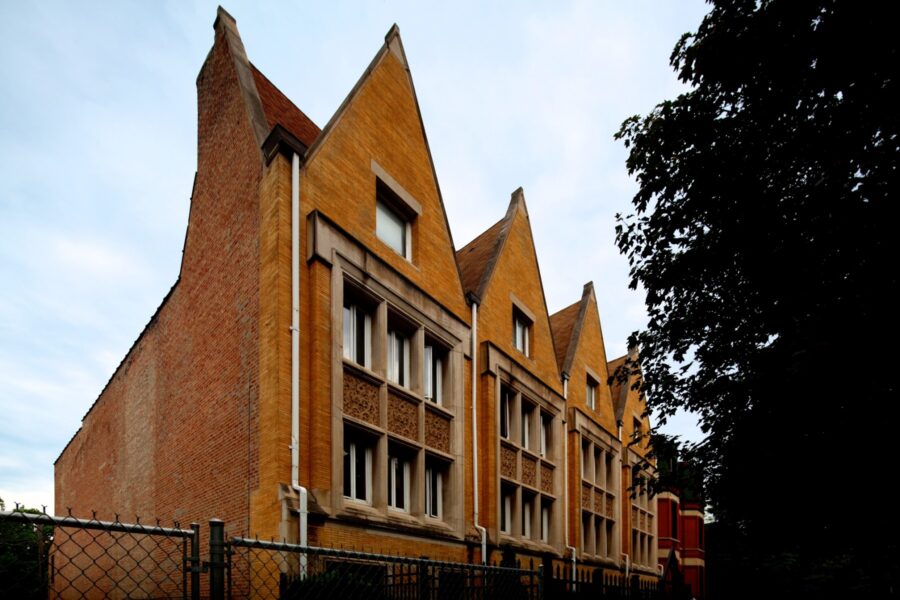 The Roloson row houses on Calumet Avenue on the South Side are a set of four attached units with dramatic front gables. Designed by Frank Lloyd Wright in 1894, they represent a transition period in his career. These houses were one of Wright’s earliest commissions–only one year after leaving Louis Sullivan’s firm.

If you look past the gables and window patterns, you might think these houses are similar to others in the neighborhood. However, a closer inspection reveals a subtle understanding of fractal geometry and visually appealing proportion. 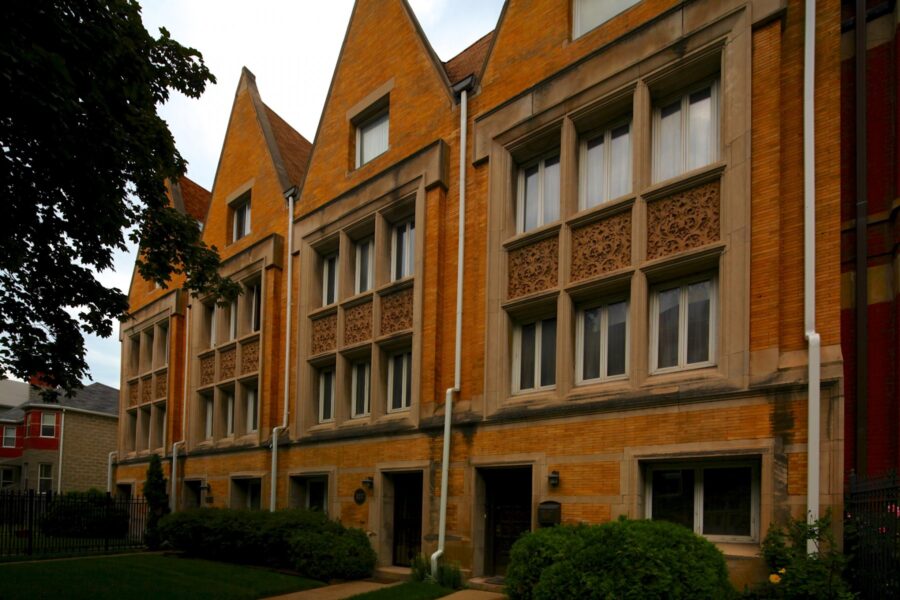 Shifting away from Queen Anne and Tudor Revival

These houses date to the early part of his career and are somewhat uncommon examples in a traditional style (in this case Queen Anne and Tudor Revival influences). The Walter Gale House in Oak Park is another example in the Queen Anne style. 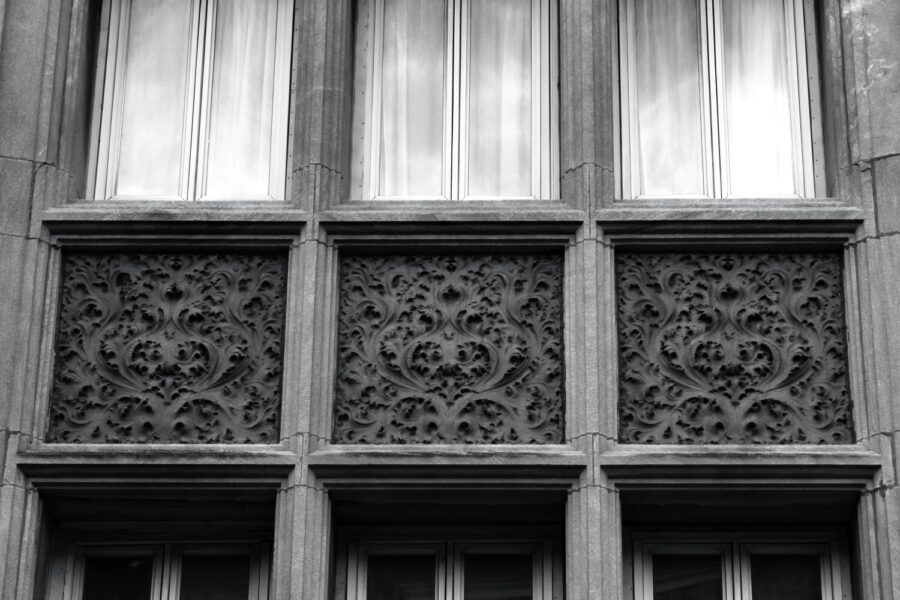 The easiest way to identify this building’s roots are the spandrels. Today, the exterior is most of what survives of the original design. The interiors were replaced or drastically altered as a result of fire and general deterioration in 1981.

At one point in time Wright had wanted to remove the prominent gables. 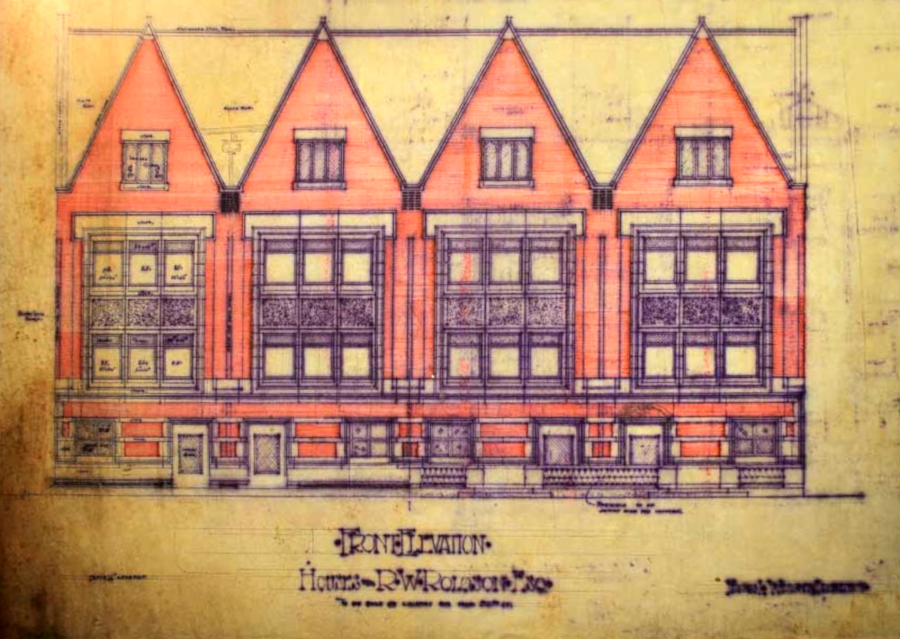 Fractals and the Rule of Thirds

While there are four houses, it isn’t the special number in the design. This structure is comprised of many self-similar patterns in sets of three.

The Rule of Thirds is the most basic rule of artistic composition and is visible in these houses on many levels. It states that “an image is most pleasing when its subjects or regions are composed along imaginary lines which divide the image into thirds — both vertically and horizontally.”

In the Roloson Houses, nearly each section consists of three nested parts. How many sets of three can you find in the design? 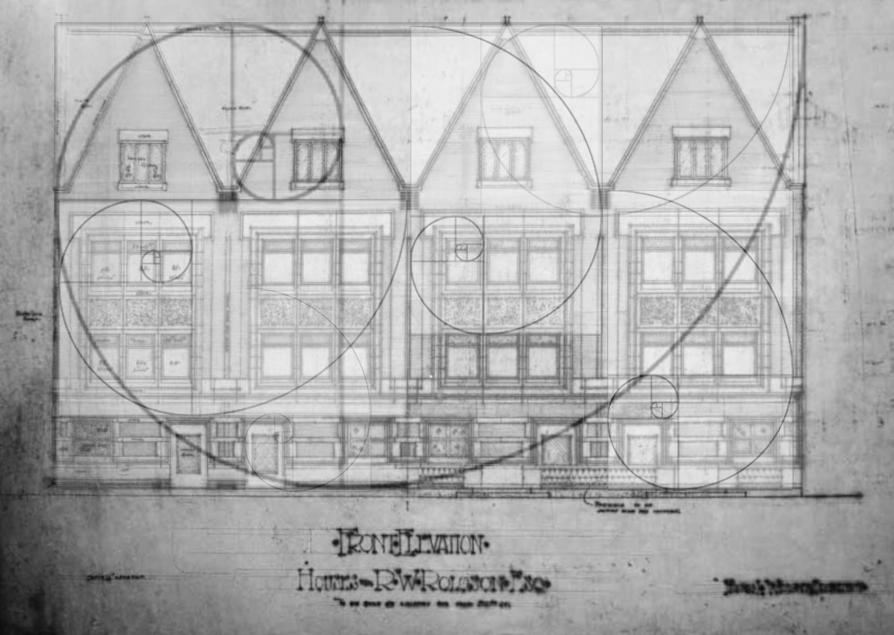 Visual Harmony and the Golden Ratio

The hidden layers of these houses don’t stop in its sets of three. Wright has long been interested in complex organic shapes, with one of his most notable works, the Guggenheim, following a nautilus shell form.

Inspired by the shape of that building, I looked for similar patterns in the Roloson row houses. I took the original drawing and added a series of properly scaled logarithmic spirals to the front facade as well as the interior floor plan. 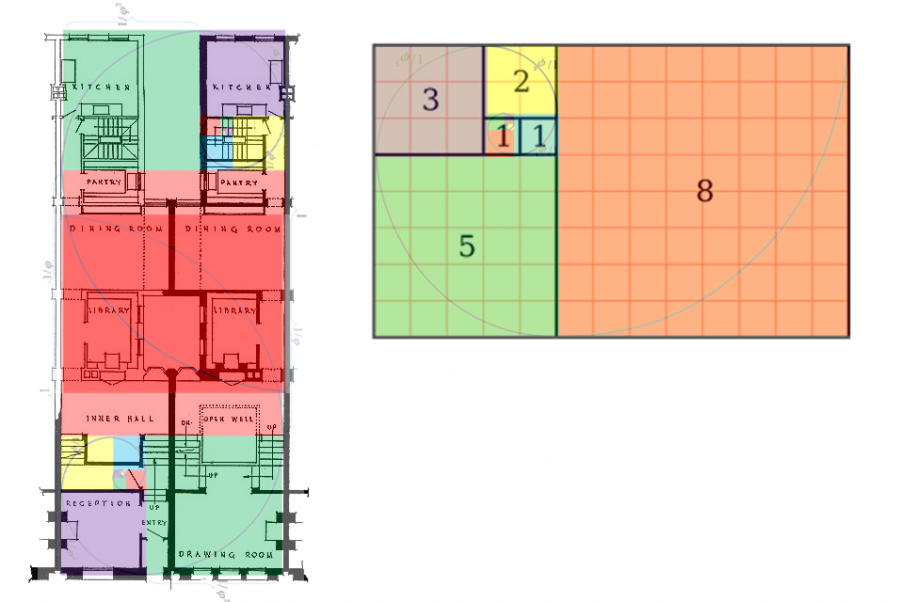 While there are overlaps in the golden ratio and the length/height ratios in Wright’s works, it’s less clear how much they dictated design. Finding the golden ratio in architecture is nothing new, as it has appeared in buildings for thousands of years. The ratio is often represented by phi (φ), after Phidias (490-420 BC), one of the most important classical Greek sculptors who used it in his designs.

The Roloson houses aren’t simply a building footprint with a length/width ratio of 1.61, or even a design that traces the golden spiral. Wright was inspired by organic forms of nature, in which the ratio and Fibonacci Sequence frequently appears.

Whether or not Wright was aware of such concepts as the Golden Mean and the Fibonacci series is a moot point. Wright used nature as the basis of his geometrical abstraction. His objective was to conventionalize the geometry which he found in Nature, and his method was to adopt the abstract simplification which he found so well expressed in the Japanese print. Therefore, it is not too shocking perhaps that in this quest his work should foreshadow the new mathematics of nature first put forth by Benoit Mandelbrot: fractal geometry.

In the video above, Vi Hart uses doodling to explain a complex range of ideas involving the golden ratio, spirals, and the Fibonacci Sequence. The important part is that this pattern is not the starting point of architecture and nature, but the result of the pursuit of efficiency and beauty.

This pattern is not just useful, not just beautiful, it is inevitable […] you discover things that seem impossible to be true and then discover why it is impossible for them not to be. 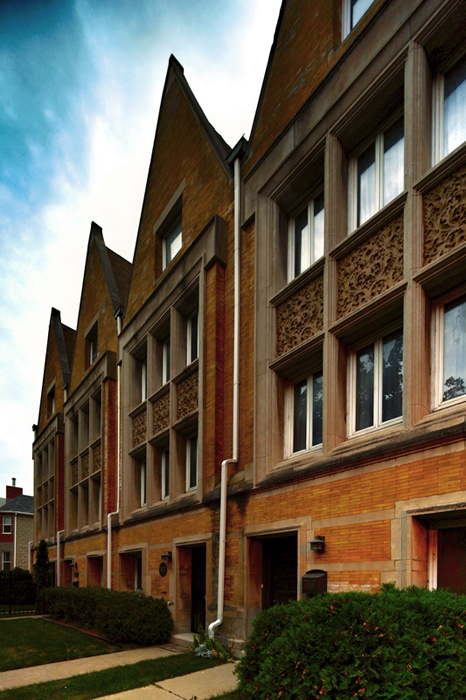 If you’d like to ponder ideas of architecture, history, self-similarity, and golden spirals, then take a visit to Calumet Avenue on the South Side to see it for yourself.

Also in the neighborhood: