Last year we explored this phenomena in The Emergence, Demolition, and Preservation of Italianate Cottages and Flats. Unsurprisingly, the trend continues in 2018 and isn’t slowing down. Those on the upper end of the income spectrum continue relocating closer to the city center, and with them, demands for high-end finishes and plentiful space. 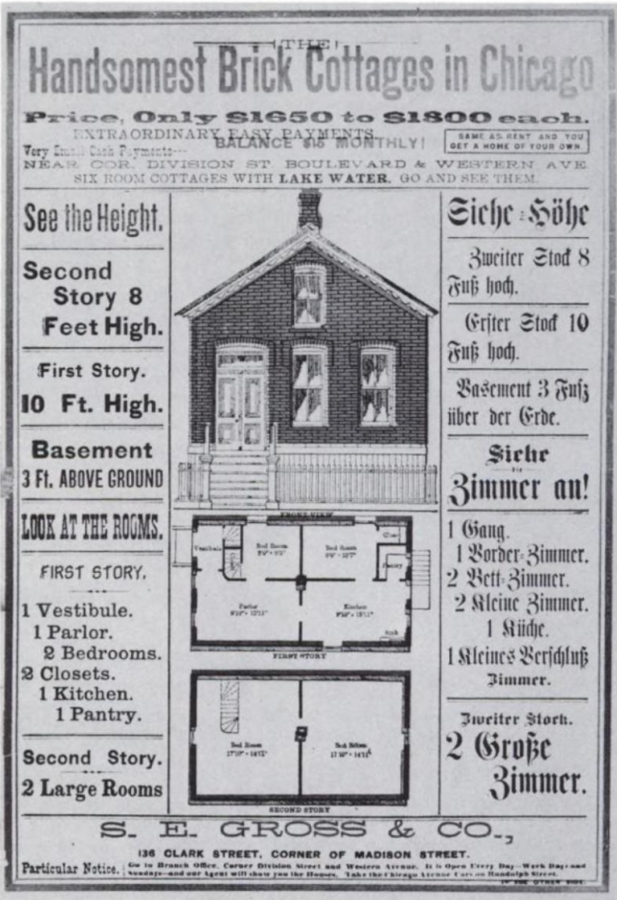 The style and classification of a Worker’s Cottage is open to interpretation, but generally there are a few common traits:

The era of the Italianate Style in Chicago, and more specifically the Worker’s Cottage, marked an expansion to the lesser settled areas of the Northwest and Southwest sides. Land was cheaper and access to the city by way of transit was rapidly improving. The Worker’s Cottage emerged as a new symbol of this diagonal migration away from the city center, as well as expanding opportunities for wage earners.

Today, Worker’s Cottages sometimes mark an opposite phenomena: developers or wealthy arrivals from areas further out demolishing them and building large new homes where they once were.

On the 2400 block of W. Thomas in Humboldt Park, there are two late 1870s/early 1880s adjacent Worker’s Cottages with pending demolition permits. At the time of writing, there are no pending new construction permits for either address (2448/2450 W. Thomas).

2448 W. Thomas looks like a frame cottage on a brick foundation from the front, but a closer inspection reveals load-bearing brick walls on the sides.

The Cook County Recorder of Deeds shows that a mortgage in the amount of $2,000,000 for both addresses to the same owner.

The $2M mortgage could be for new multifamily housing or a double-lot single family home. Nearby 2456 W. Thomas is single family new construction and recently sold for nearly $1M.

It is curious that 2448 and 2450 W. Thomas were purchased simultaneously without MLS listings, and only demolition permits remain outstanding. The area is zoned RT-4 which allows for single family homes, two-flats, and low density apartment buildings.

A few blocks east of rapidly changing W. Thomas St. is the 1000 block of N. Honore. Much of this block has already transitioned from long-time residents and old houses to new arrivals and new construction. 1022 N. Honore (above) recently sold for $737K, and a pending demolition permit indicates it won’t be around for much longer.

Future plans are uncertain. There isn’t yet a pending new construction permit.

1043 N. Honore is getting rehabbed instead of destroyed [John Morris/Chicago Patterns]

A Pleasant Exception on the 1000 Block

Many of the homes on the 1000 block of N. Honore were recently built after demolishing existing housing stock. However, one notable exception is 1043 N. Honore, which lives to see another day. This unique Worker’s Cottage features familiar cornice brackets and facade, but has yellow checkerboard brick and covered front porch with matching brick columns.

While it is currently surrounded by green fencing which usually indicates demolition, permit records 1043 N. Honore is getting rehabbed rather than demolished.

2420 W. Iowa is a two-unit brick building that dates to the late 1870s. After 140 years of providing shelter to generations of Chicagoans, it will get replaced by a new three-unit building.

Familiar Story for Lincoln Park on the 2100 Block of Kenmore

While future plans for some properties listed here are not certain in permit records or property deed transactions, plans for 2120 N. Kenmore are clear. In an all-too-familiar story, a post-Fire home will give way to a large, new three-story home.

One response to “Five North Side Worker’s Cottages Facing Demolition”