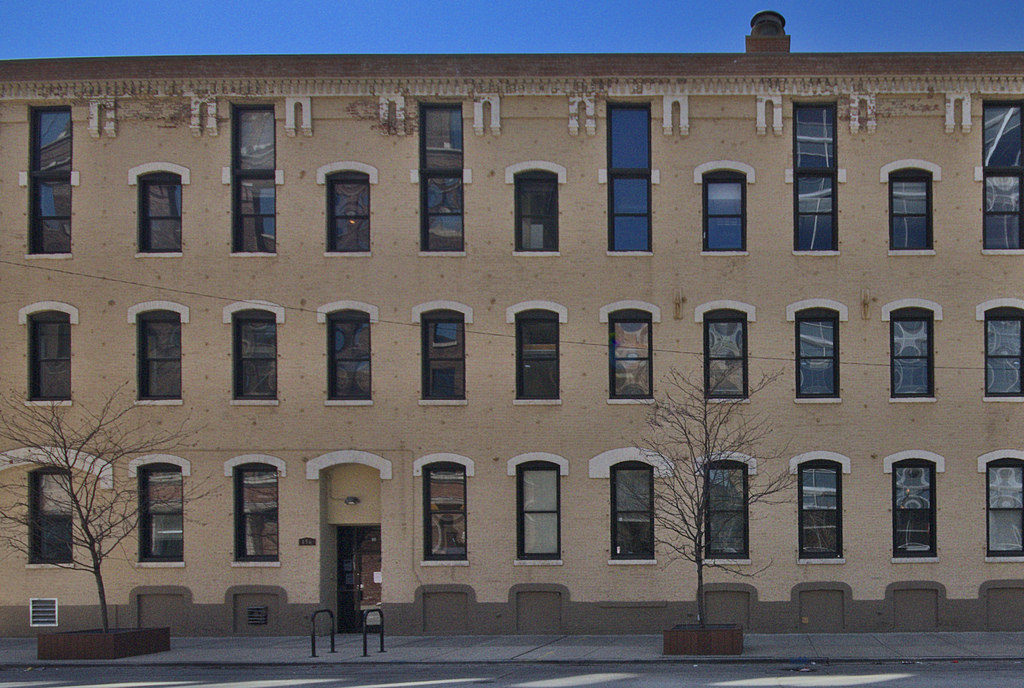 That factory building is at 154 – 166 North Jefferson Street, and was built in 1865 by the Crane Company, an iron and brass parts manufacturer. Days ago, a demolition permit was issued for wrecking and removal in order to accommodate a 14-story high-rise residential tower being erected at 165 North Des Plaines Street by Portland-based developer Gerding Edlen. According to an “insider tip” provided to ChicagoArchitecture.org, the rear buildings behind the Jefferson Street building will be demolished for the redevelopment, and the front-facing building is set to be renovated into residences.

With a big transformation shaping up around the site of this unique building pre-dating the Great Chicago Fire, this article will help put a spotlight on the building’s history, and document the story of the Crane Company and and present-day conditions that have led to the changes on North Jefferson Street. 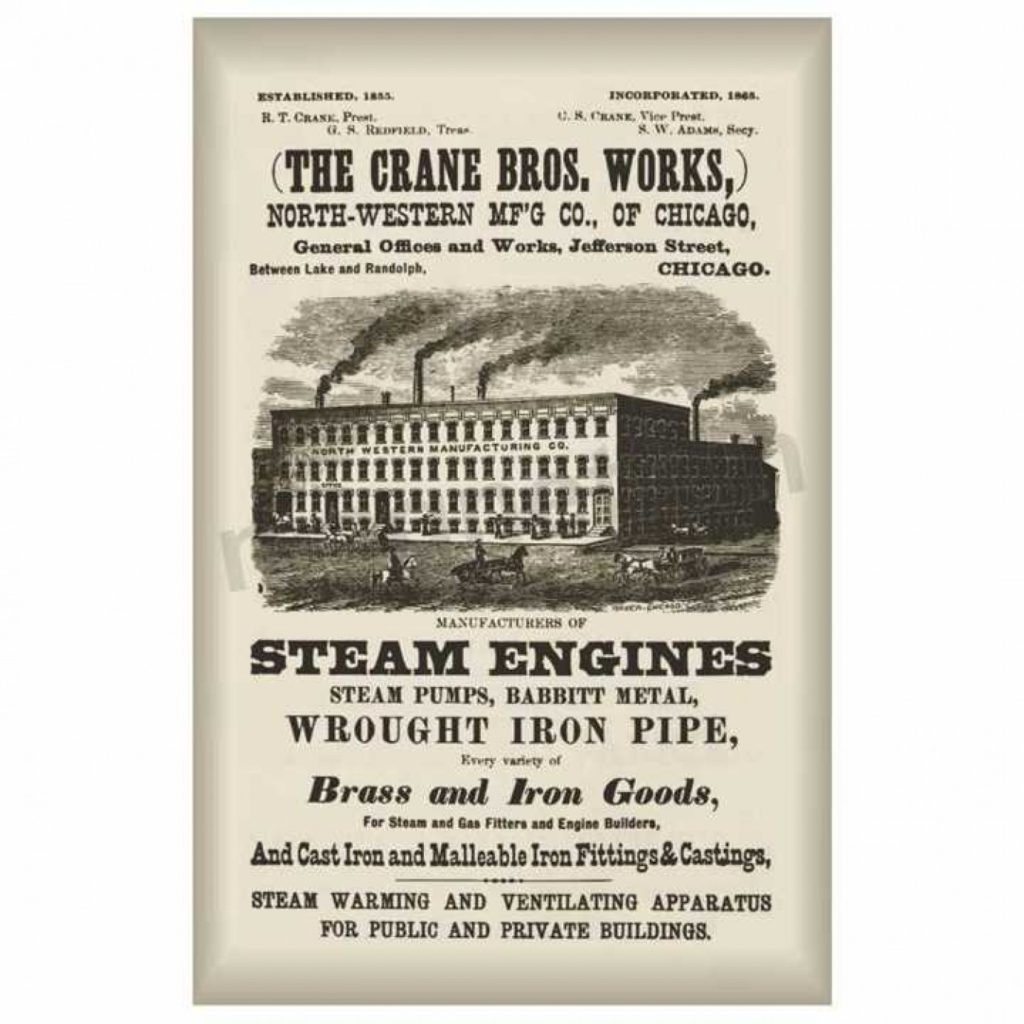 Richard T. (R.T.) Crane grew up in New Jersey and started his professional life as a foundry apprentice in Brooklyn. When the Panic of 1854 struck the region, he saw an opportunity to make a new start out in the developing West. Upon arriving in Chicago in 1855, he opened his first shop at the southwest corner of Canal and Fulton Streets, in a corner of his uncle’s lumberyard. Small and modest orders casting locomotive steam engine parts grew into large contracts with railcar manufacturers, as his business developed a reputation for the fine quality and craftsmanship of their work. He convinced his brother in New Jersey to join him to help manage his accelerating business in Chicago.

Evolving from basic engine parts supply, additional product lines were started by Crane, including wrought iron pipes, steam engines and pumps. With the steam heating industry just beginning to develop, Crane foresaw opportunities for rapid growth here in residential applications of his technology, not just industrial ones. He sent for experts in New York to join his business so that he could continue to produce the best quality products, and position his company among the finest in Chicago when it came to steam heating systems. 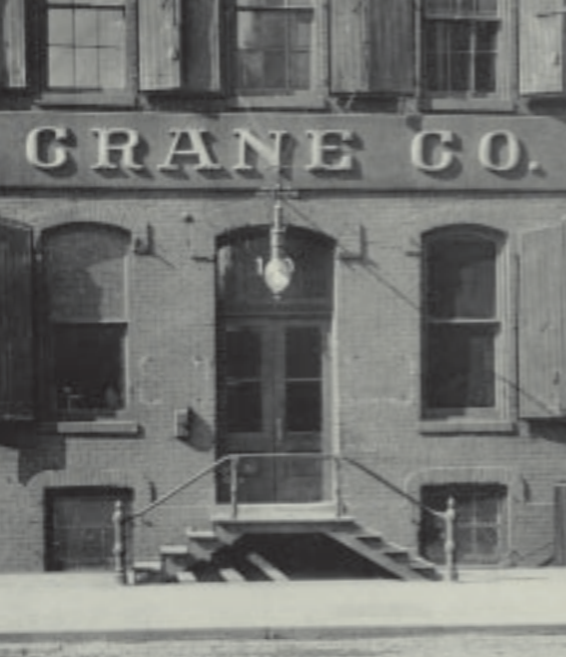 In 1858, the Crane Company was awarded a $6,000 contract to furnish the Cook County Courthouse with steam heating systems. It was the largest contract of its kind in the region, and further increased orders and contracts for the well-renowned company. The start of the Civil War in 1861 also produced a boom of brass saddle fittings and wagon equipment orders for Crane. This kind of rapid growth required an expansion of their facilities and in 1864, Crane Company purchased the site at the center of this article at 154 – 166 North Jefferson Street, then 10 Jefferson Street on the city’s old, pre-standardized address system.

In 1865, they erected a four-story warehouse and office building with the nation’s first malleable iron foundry (also the first above ground floor) in the West. The focus of their business became steam engines and pumps, and the company incorporated as the Northwestern Manufacturing Company. 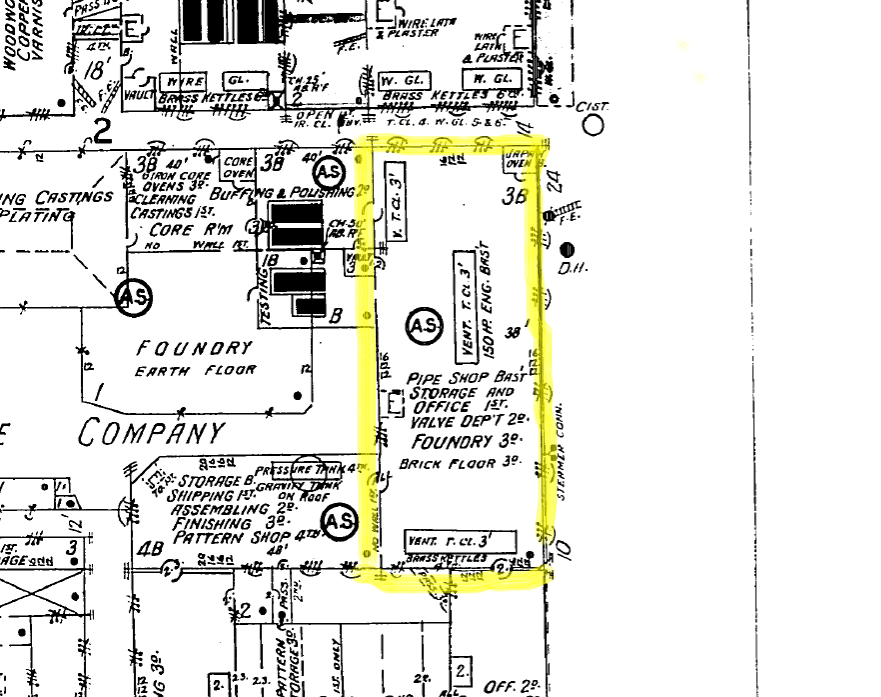 Excerpt of 1905 Sanborn Fire Insurance Map depicting the 154 North Jefferson Street building and later additions to the south and west. Note the “10” at the lower right corner, which was the building’s pre-1909 address.

The Great Chicago Fire devastated the downtown area October 8-10, 1871, destroying its building stock and infrastructure. The Crane Company headquarters however were unscathed, situated 3 blocks west of the Chicago River, and also not affected by the terrible winds that spread the fires north across the river for miles and claimed hundreds of lives. 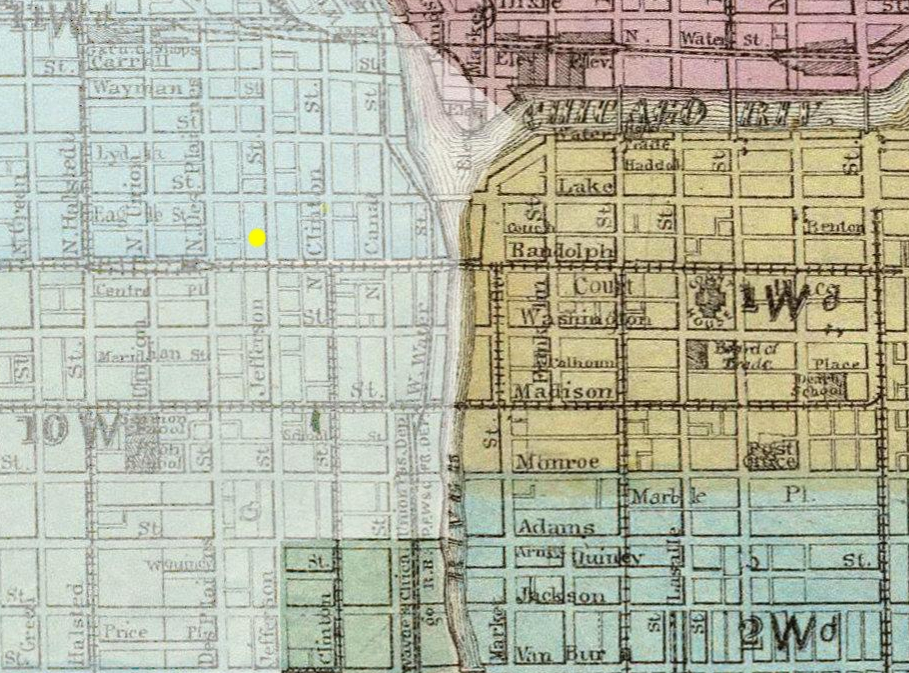 Map detail of the 1871 Great Chicago Fire coverage in the downtown area. Areas shaded in white on the west side of the Chicago River were not affected, including 154 North Jefferson Street building located at the yellow dot. (via)

In the desolate, hopeless aftermath of the Fire, R.T. Crane was emboldened with a sense of “civic duty” and “decided it was time for his company to begin to repay a debt to the city that had given an extraordinary opportunity to a penniless young man”. He provided to the city his company’s steam pump technology to pump the Chicago River at Madison Street to supply the city’s water mains. 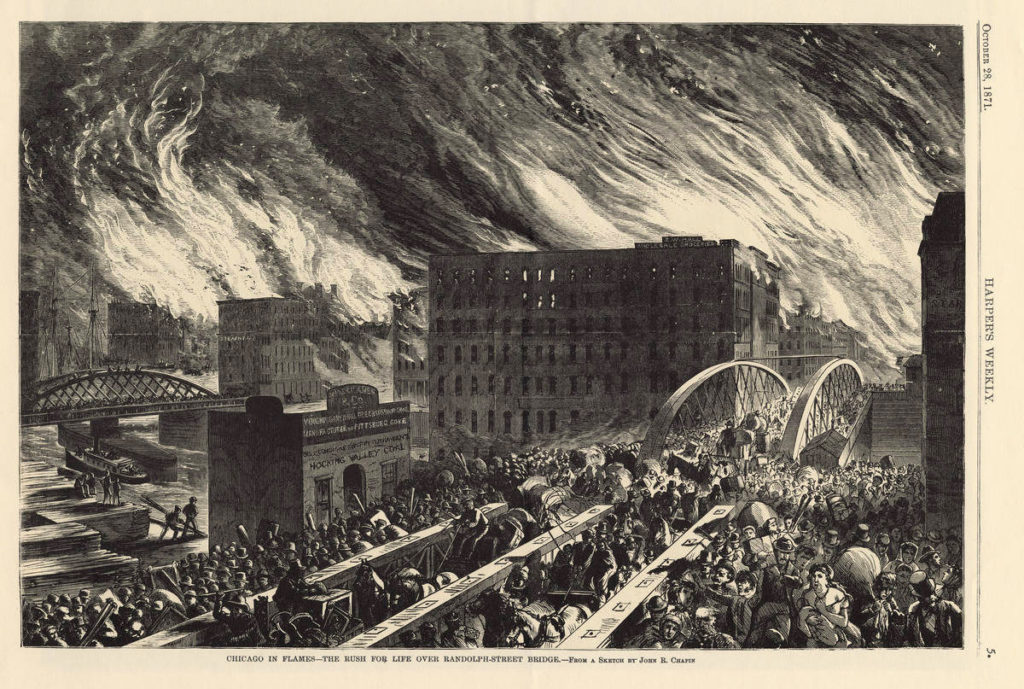 An artist’s sketch from Harper’s Weekly depicting Randolph Street at the Chicago River towards downtown during the Great Chicago Fire. The Crane Company building would have been a block away from this scene. [Wikimedia Commons]

The city’s only water works infrastructure including the famed water tower near present-day Chicago and Michigan Avenues were very damaged by the fire, leaving the entire city without water service. The Crane Company’s steam pumps were powered by locomotives 24 hours a day, 7 days a week until the Chicago Avenue Pumping Station was repaired for use again. Soon after in 1872, Charles Crane left the company, and R.T. Crane again renamed the company to “Crane Bros. Manufacturing Company” in honor of his brother. 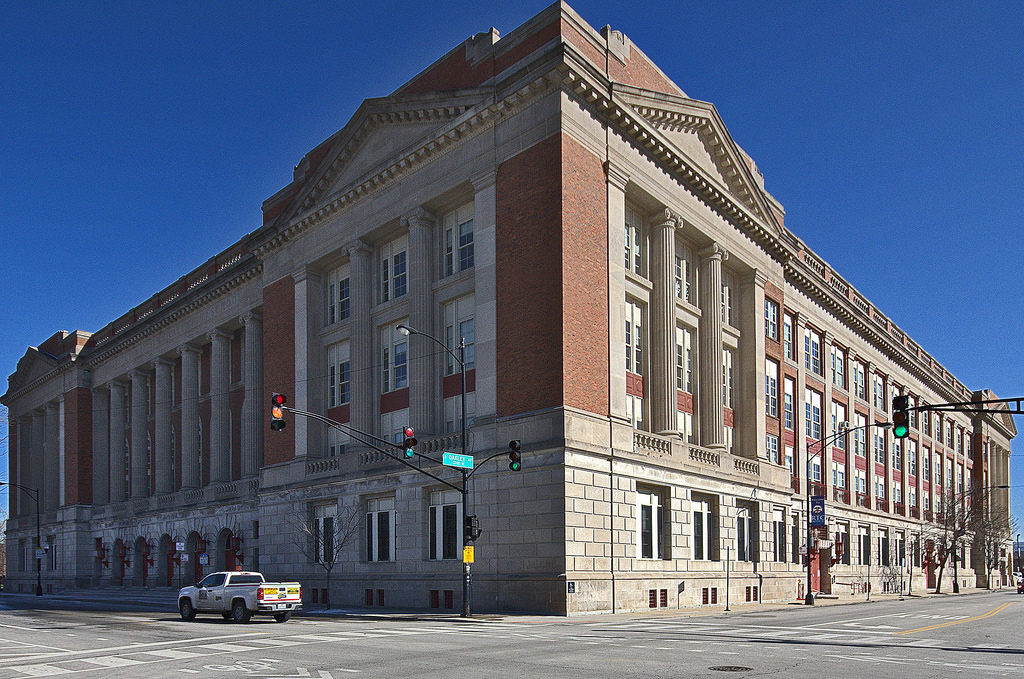 In the decades following the post-Fire rebirth of the city, the Crane Company continued to expand and acquire properties throughout Chicago in the South Loop and Lawndale areas, and further east into Indiana and Ohio. Richard T. Crane Medical Prep High School at 2245 West Jackson Boulevard on the Near West Side was named in honor of R.T. Crane, a vocal proponent of manual-training and mechanical education for working-class children. Crane himself introduced the concept of manual training into Chicago Public Schools in 1891, establishing 5 schools in his lifetime and funding scholarships for teachers to provide mechanical instruction to students. 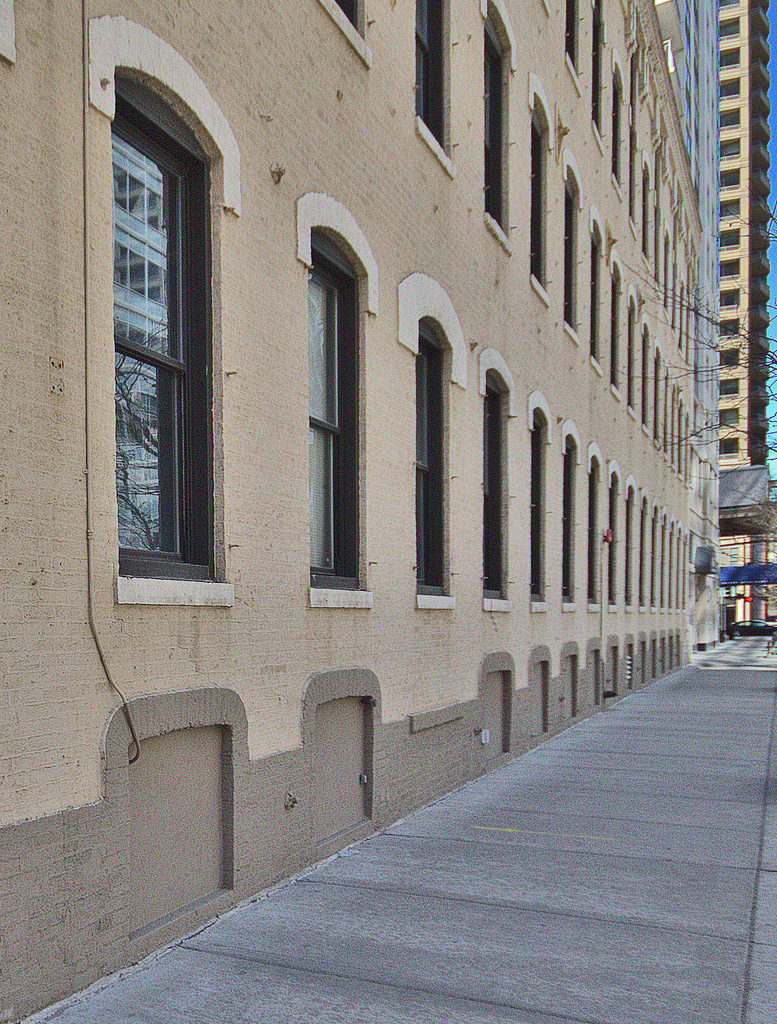 History shows us that the Crane Company and its founder have had an amazing, illustrious past and relationship with the City of Chicago. The Crane Company building at 154 – 166 North Jefferson Street has remained in excellent physical condition and maintained a high level of integrity to its historic architectural style, with only cosmetic alterations to replace original doorways and railings, and top-level window bays. The building is recorded in the Chicago Landmarks Historic Resources Survey (CHRS), however it is rated “Green” (the third-lowest rating in their color-coded system) which is given to “pre-1940s buildings whose exteriors have been slightly altered from their original condition”. Only ratings of “Orange” and “Red” convey any historic significance and protection upon buildings, mandating a 90-day review period when a permit is sought for their demolition. 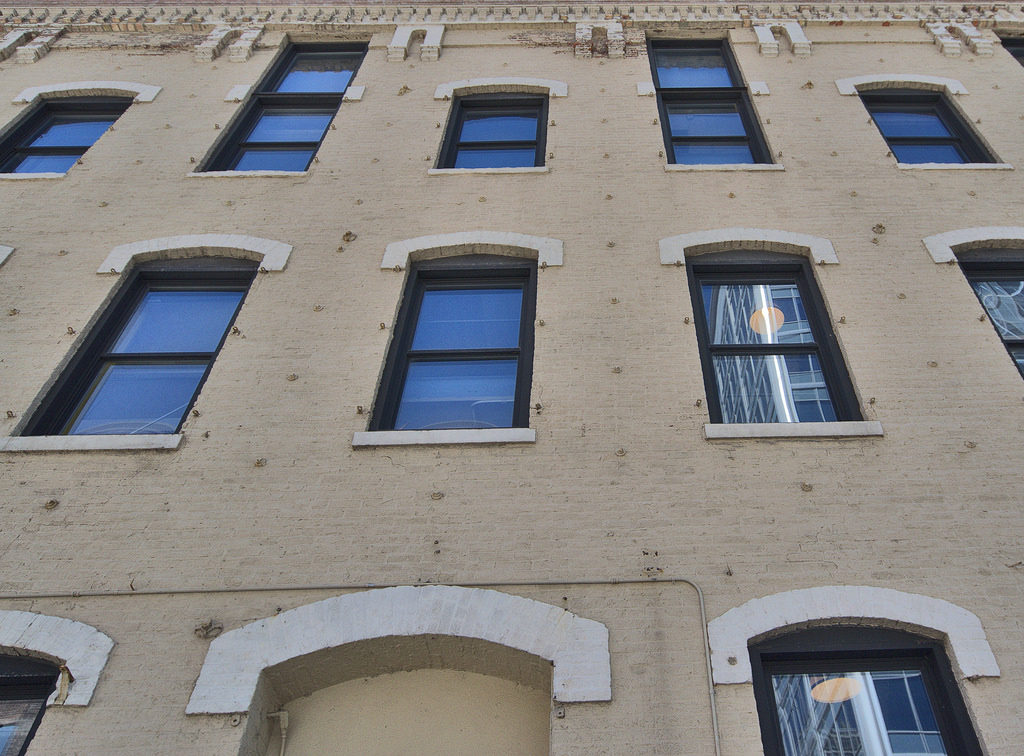 Studying the building in architectural terms, there is a detailed pattern of brick corbelling around the cornice line. A pair of prong-like extensions below the line and between each window bay appear to mimic Italianate cornice bracketing. On top of each window bay is a bracket-shaped white segmented brick window hood, a common motif for Italianate-style buildings of this age, and larger versions surround the former doorways that sit on the first floor at end each end of the structure.

Another fascinating detail is the profusion of anchor bolts on the facade, forming a grid-like pattern when seen from further away—I’ve seen a lot of buildings in Chicago, and this has to be the only one I’ve seen with so many protruding bolts. This construction method is another indicator of a mid-1800s construction date, when large & heavy brick walls were fastened together horizontally by steel tie-rods with the anchor bolts (sometimes in ornamental design, like the common star shape) visible on the outside of the wall. Anchoring them to one another this way prevented lateral bowing of the heavy walls. 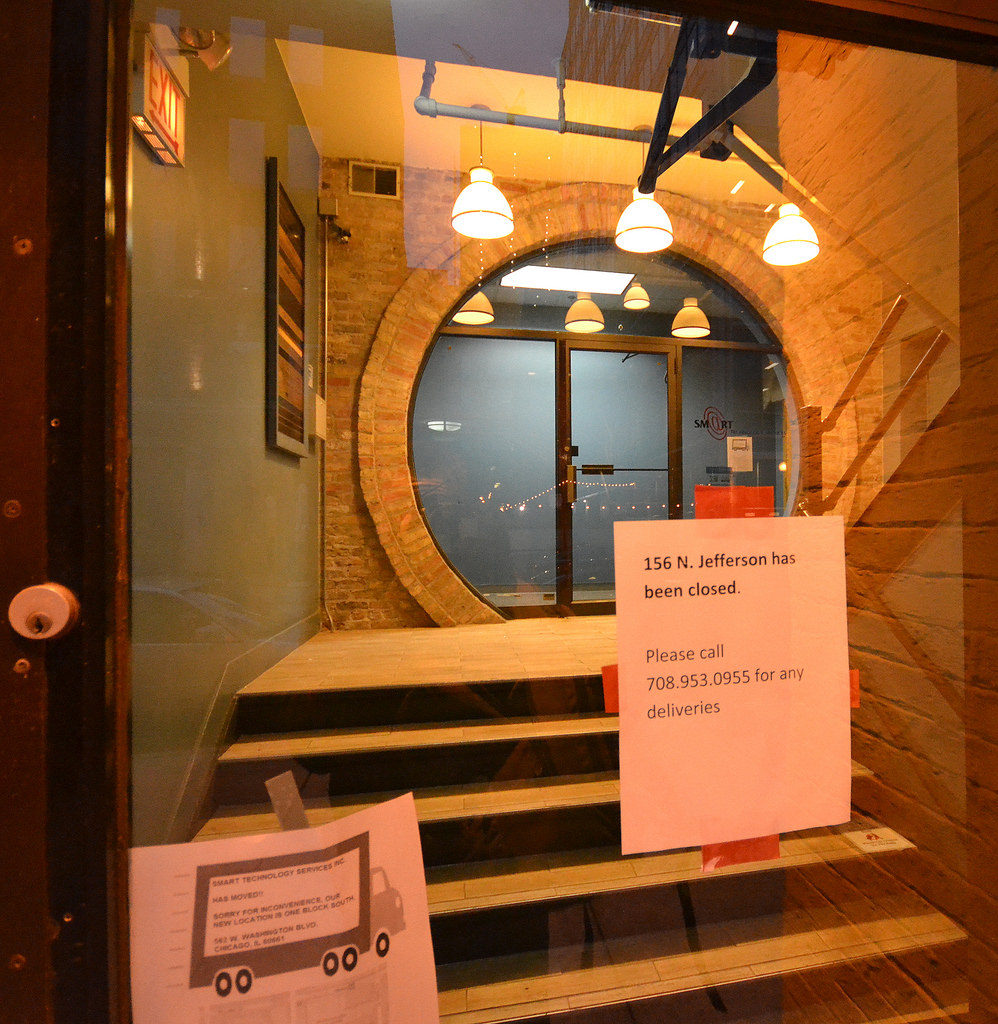 The building been used as for assorted professional offices for the past several years, but these offices have since been vacated according to signage on building entrances. A demolition permit was recently issued April 5th, so that rear buildings at the 154 – 166 North Jefferson Street site can be removed to make room for a 14-story residential tower at 165 North Des Plaines Street. One year ago on February 24th, 2015, the site was sold for $13.5 million to Gerding Edlen, a Portland-based development firm. This is the same developer responsible for the “Xavier” high-rise residential tower at 625 West Division Street in the former Cabrini-Green neighborhood. 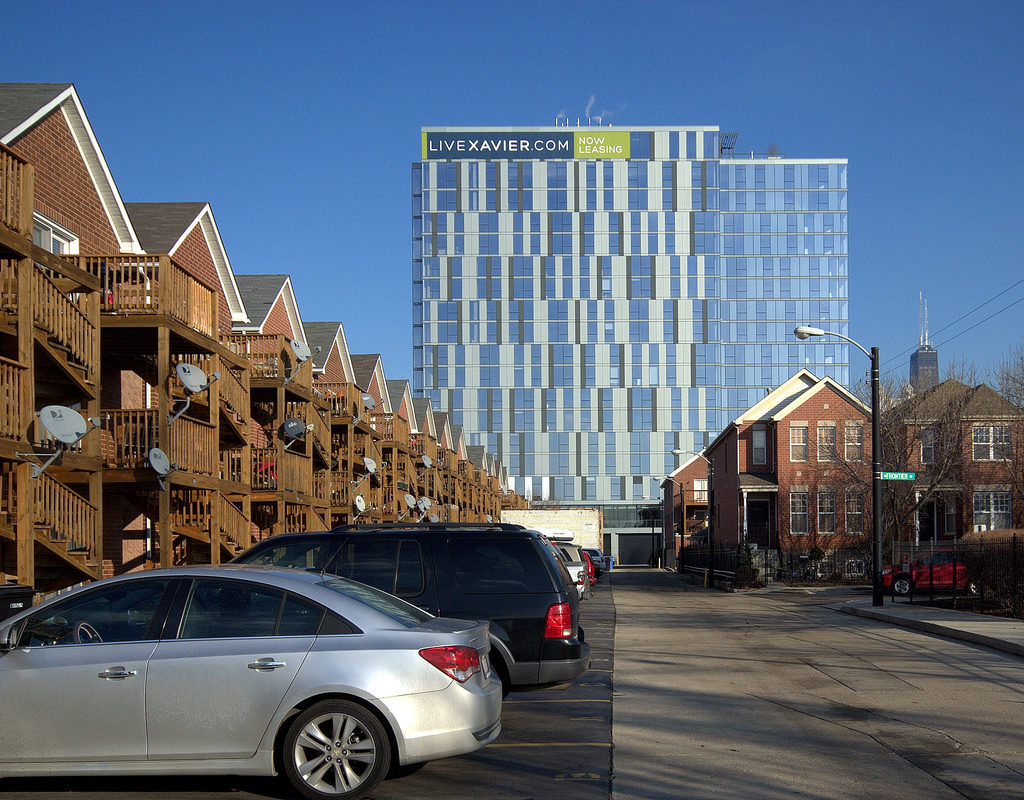 At the time of the sale, the story was covered by Crain’s Chicago Business, and some insights provided as to the motivations and any future plans. Developer Gerding Edlen described the hot proximity of the location, between office towers of the West Loop near the river and the exploding Fulton Market District and future Google headquarters west of Halsted. The site is “great for either office or residential use”.

“As a firm, we have strong experience in both office and residential, and, likewise, we are always very attracted to redevelopment of historic properties as we have done in Seattle and Portland,” Edlen said. “We were really drawn to the property for those reasons. For now the property will remain as a loft office building as we assess future potential.” 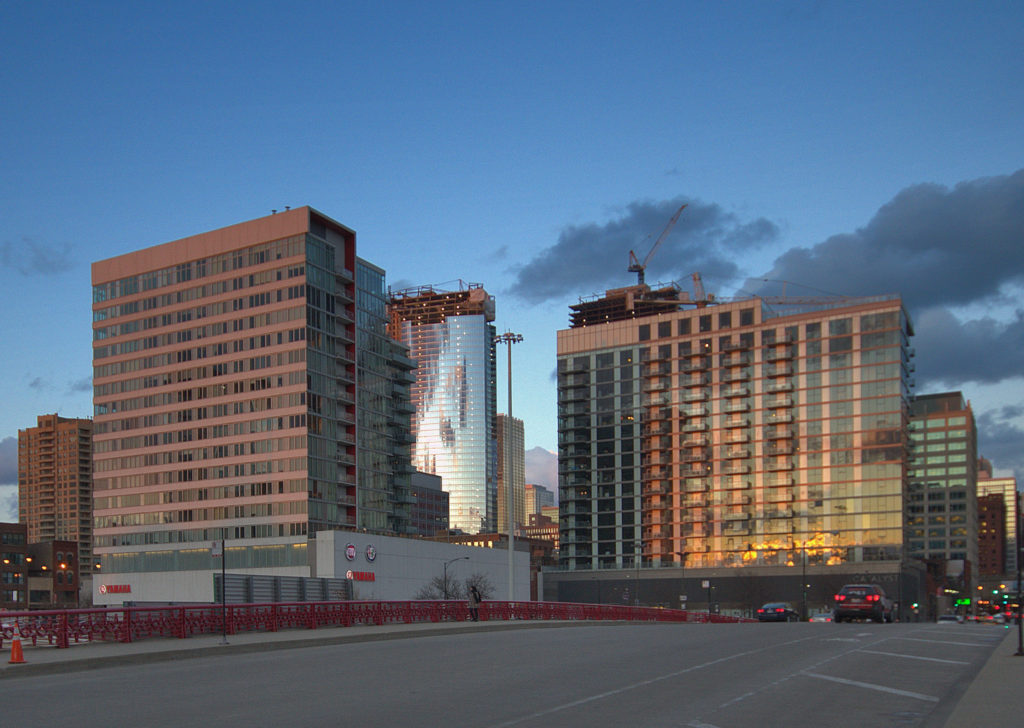 Currently, there is very little public information or plans available regarding the 165 North Des Plaines Street development or how exactly the site at 154 – 166 North Jefferson Street will ultimately be affected and transformed. As far as we know, the 1865 building will be renovated into residences of some kind and will remain standing as a significant piece of the neighborhood fabric in the West Loop. While this appears to be great outcome for a one-of-a-kind historic building in Chicago, the jury is still out on the final results and public plans have yet to be released for review.

The city of Chicago has enjoyed recent saves of historically-significant architecture from demolition like the unique Carl Street Studios and landmarking of West Burton Place. At the same time, we have witnessed so many lost and destroyed under similar redevelopment circumstances, such as William Van Osdel’s 209 West Lake Street building and many more. Take this particular situation: Does this building’s “slight alterations” (which arguably don’t detract from its architectural character) actually diminish its historic importance or cultural significance? Do 150 years of this building’s history become irrelevant once a doorway or window bay is changed? The lack of formal recognition of this building allows its immediate demolition once the permit is signed, another in the litany of “unknown” historic architecture lost in a city known first and foremost for its architecture.

154 – 166 North Jefferson Street, viewing southwest. The alternating window sizes, is an alteration from the original configuration. Double-door entrances with cast-iron stairwells also once sat at each end on the first story. [Gabriel X. Michael/Chicago Patterns]

Many interested in historic preservation agree that the decades-old survey used as preservation criteria, while admirable and valuable, should be resurrected, so we can end the cycle where the issuance of a demolition permit turns every survey oversight or information gap into a preservation emergency. We need a designation process that is more informed, accessible, and responsive, to protect these overlooked buildings with recognition of historic significance and landmark status protection when appropriate. The Crane Company building still survives today as a relic of the formerly industrial West Loop, and it will contribute to the neighborhood for decades to come as long as we recognize it for the important place it is.